There are many reasons someone would call a surveyor.

Surveyors take care not only of the infrastructure above us and the utilities below our feet but are measurement experts that can provide the most accurate geospatial data needed to make informed decisions that ensure the safety of everyone – be it humans or nature.

The Tiemann & Partner Surveying company has more than 50 years of experience fulfilling the measuring and positioning needs across many industries, including building, municipalities, utilities, infrastructure and more. One recent call requested to provide an environmental management service – the mapping of a noxious weed from a dumping ground formed and greened out of a landfill.

Among the many surveying services Tiemann & Partner provides with Leica Geosystems equipment, the German surveying company offers data services. From data acquisition to data processing and GIS services to geodata management. This expertise, combined with new the Leica FLX100 Antenna paired with an Augmented Reality (AR) app set the company for success in its new environmental management mission. 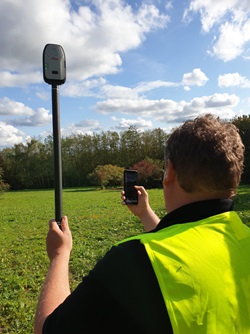 The Grevel dump, like other hills in the Ruhr region in Germany, has been transformed from a waste dump site into a restored body planted with vegetation. This slag heap, or area of refuse material from a mine or industrial site, is known locally as the "Greveler Alm." The transformed waste dump now provides a new habitat for animals and has become a popular destination for excursions and local recreation with a fantastic view of the surrounding area.

But as in any green area, pests need to be managed and controlled. There are giant hogweed sites on the slag heap which are being recorded. The spread and growth of the giant hogweed, considered to be a noxious weed, is to be prevented by intensive mowing. The control is carried out in an ecological way without the use of additional chemicals.

Previously, a surveyor would record the locations of the giant hogweed with a GNSS controller, add the recorded coordinates into site plans and send PDF files to an engineering company. Engineers and landscape conservationists had then to print out these plans and navigate to the giant hogweed sites on the slag heap, using a traditional map-based navigation system.

For this and further GIS requests, Tiemann & Partner need a lightweight and affordable GIS data collector that could be coupled to a smartphone, while providing a reliable position coordinate and be compatible with the AR application.

Fitting all criteria, Tiemann & Partner selected the FLX100 Antenna. For its first task, a field worker easily paired the antenna with Leica Zeno Connect software using an Android smartphone with FX Reality App. The combination of the FLX antenna with the AR app from frox overlays data into the visible world and provides users with the assets they need to visualise on location in real time.

“The digitalisation of the workflow leads to a considerable cost and speed advantage. The acquisition, data preparation and provision are accelerated by at least 70%,” says Ingo Tiemann, surveying engineer and CEO at Tiemann & Partner.

With the ability to combine feature-rich GIS data with AR into a smartphone or tablet, surveyors and non-surveying staff at Tiemann & Partner can now visualise any asset or measurement, such as property boundaries, canals, underground lines, drilling points, soil estimates, street inventories and much more.

What previously existed on paper can be seen at their fingertips as they walk, including underground objects like pipes and ducts. Besides experiencing data visually, Tiemann & Partner surveyors can maintain or measure with centimetre accuracy any points, lines or areas. With the antenna and app solution, crew members can control, add attributes or record in 3D AR or in a 2D map.

“Analogue plans are no longer required, and greater flexibility is provided by all those involved in the process. In addition, the data is always up to date and there is a central database,” explains Ingo Tiemann, surveying engineer and CEO at Tiemann & Partner. “Searching and calibrating with Augmented Reality is much easier and faster for non-surveyors or cartographers.” 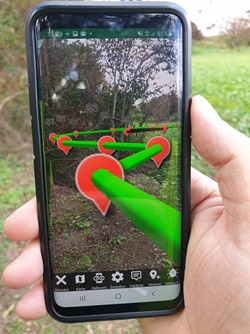 To record and maintain the poisonous weed, Tiemann & Partner used this solution and recorded point and line objects in every location while storing GIS metadata, such as DOP values and accuracy. All collected data was made available to stakeholders via ArcGIS.

“With the Augmented Reality approach, analogue plans and workflows become unnecessary. The data is collected by the surveying office or EDG staff directly on site using the FX Reality App and the FLX100 GNSS antenna. The captured data is written directly with attributes and photos into the Feature Service on the ArcGIS platform,” declares surveying engineer and CEO at Tiemann & Partner.

Due to the extensive meadows on the slag heap, the locations of the giant hogweed are no longer visible when mowed. By using the FLX100 smart antenna, a field worker was able to search and control the giant hogweed sites directly on-site amidst countless types of bushes and trees, together with the stone rubble, herbs and lawns on the summit. The location provided by the antenna throughout the approximately four-kilometre-long network of paths was accurate to centimetres. With the combined solution, the user could easily find the giant hogweed sites even when mowed.

“GNSS surveying creates a highly accurate coordinate of each location, which has clear advantages over a coordinate mapped to within 20m. Especially in regular checks, it can be seen directly whether the mowing work is successful against growth,” explains Ingo Tiemann surveying engineer and CEO at Tiemann & Partner.

Getting ready in less than one hour

Tiemann & Partner relies on Leica Geosystems as its technology provider. Before getting the FLX100 antenna, they relied on the Zeno Series GG04 plus for GIS data collection. A one-hour briefing is all Tiemann & Partner required to start collecting high-accurate data with the FLX100 smart antenna and FX Reality App.

“The connection of the GNSS antenna works by plug and play and the calibration and searching in the AR interface is extremely intuitive. Using the FLX100 on a pole, in a breast pocket, as a handheld standing on the object or on the ground is ideal. The flexibility is therefore enormously high in its application,” says Ingo Tiemann surveying engineer and CEO at Tiemann & Partner.

Control and maintenance attributes with GNSS and AR

What applies to mowed weed can also be harnessed fo

r invisible structures such as underground lines, utilities, boundary lines and planned buildings – all important components of a digital twin.

Merging technologies, like GNSS and VR, into single workflows, allow everyone to experience and interact with data in more efficient and smart ways. Capturing and displaying information in real environments instantly enables better decision making, saving time and resources.

Although there are many reasons someone would call a surveyor, with the FLX 100 in combination with FX Reality from frox non-professionals can easily collect GIS data too.