In slab risk mitigation: a case for 3D laser scanning in commercial construction

Over the 25 years of servicing the construction industry, RM Surveys have noticed slab deformation is a common issue with little to no documentation. Slab deformation causes non-compliant floor levels resulting in unexpected problems during fit-out and final form. Such cases can result in budget issues, delays and can lead to critical structural deformation issues that deem buildings unsafe.

There are several reasons why slab deformation can arise, but the documentation to understand why and mitigate the risk is incomplete or inaccurate. To address this problem, RM Surveys uses a four-stage process to reduce the risk for structural deformation, specifically slab issues. Using 3D laser scanning RM Surveys document a slab pre-pour, post-pour and post prop and tension. The deliverable is a report showing the differential of levelness and flatness to design. Currently, structural documentation is generally only practised post-pour of a typical concrete pour. A surveyor would document the post concrete pour for Pour Compliance to confirm level and flatness. But we must ask, how much money could be saved and risk reduced if we started our projects with better and more accurate data?

The lack of continual documentation throughout the construction can leave builders and subcontractors exposed to:

Laser scanning gives stakeholders in the construction industry the ability to collect information from surfaces and structures at each stage and identify any potential problems that might arise during construction. By detecting conflicts and issues during the early stages of the project — before building work has even begun — organisations can avoid timeline delays and come up with solutions before starting construction, drastically reducing the cost of rework.

The laser scanner of choice for RM surveys is the Leica RTC360 laser scanner due to being highly portable and its design for maximum productivity on a building construction site with a measuring rate of up to 2 million points per second, advanced HDR imaging system and the creation of coloured 3D point clouds. Solutions that they worked on:

Leica Cyclone 3D Point Cloud Processing Software is then used to process the data, while Leica Cyclone 3DR is used to clean up the data sets, and the floor extraction tool is used to remove any unwanted elements. In addition, heat maps are created to show levelness and meshes to provide documentation at each stage.

Stage 1 Pre concrete pour
Laser scanning is used to capture the pre concrete pour. RM Surveys can use scanned data to demonstrate that the assets exist as per the engineering drawings, giving complete documentation pre-pour of the assets from the start. 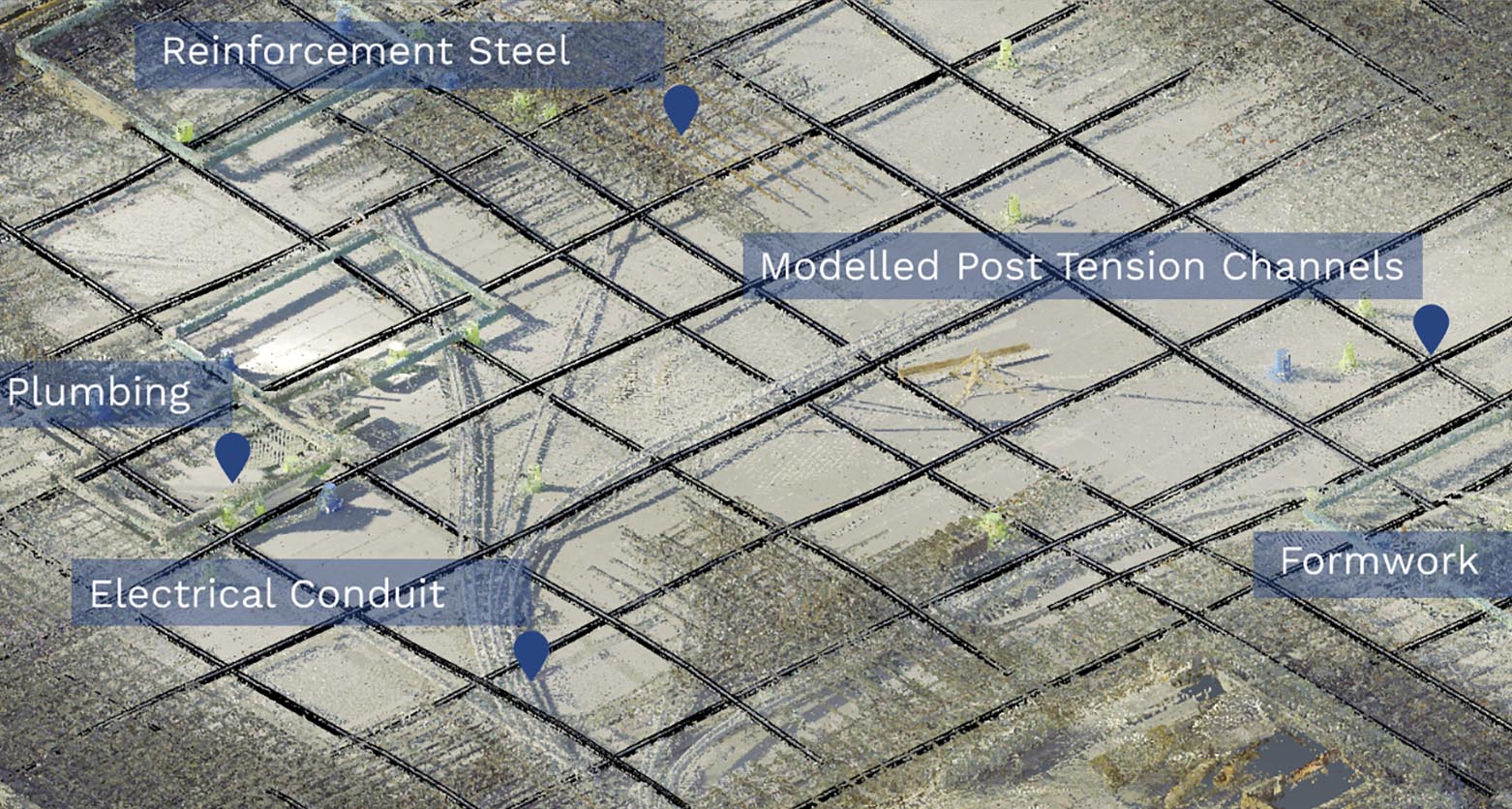 The team capture the finished form directly post pour to ensure the pour was compliant with the design. The documentation provides millimetre-accurate data that can be shown in highly detailed and informative reports. 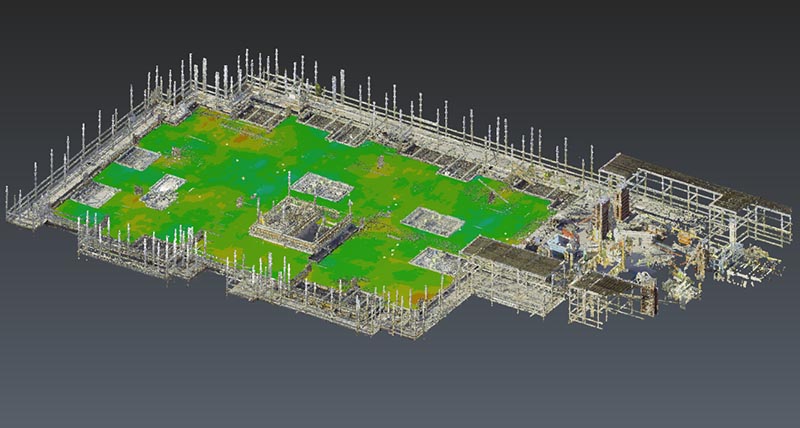 Once the slab has met strength targets, completed post tensioning, and all temporary propping removed, the slab is captured again. This indicates the true deformation of the structure.

The reporting is once again compared to design. Engineering elements such as post tension cabling are shown in relation to the deviations in the slab for context. 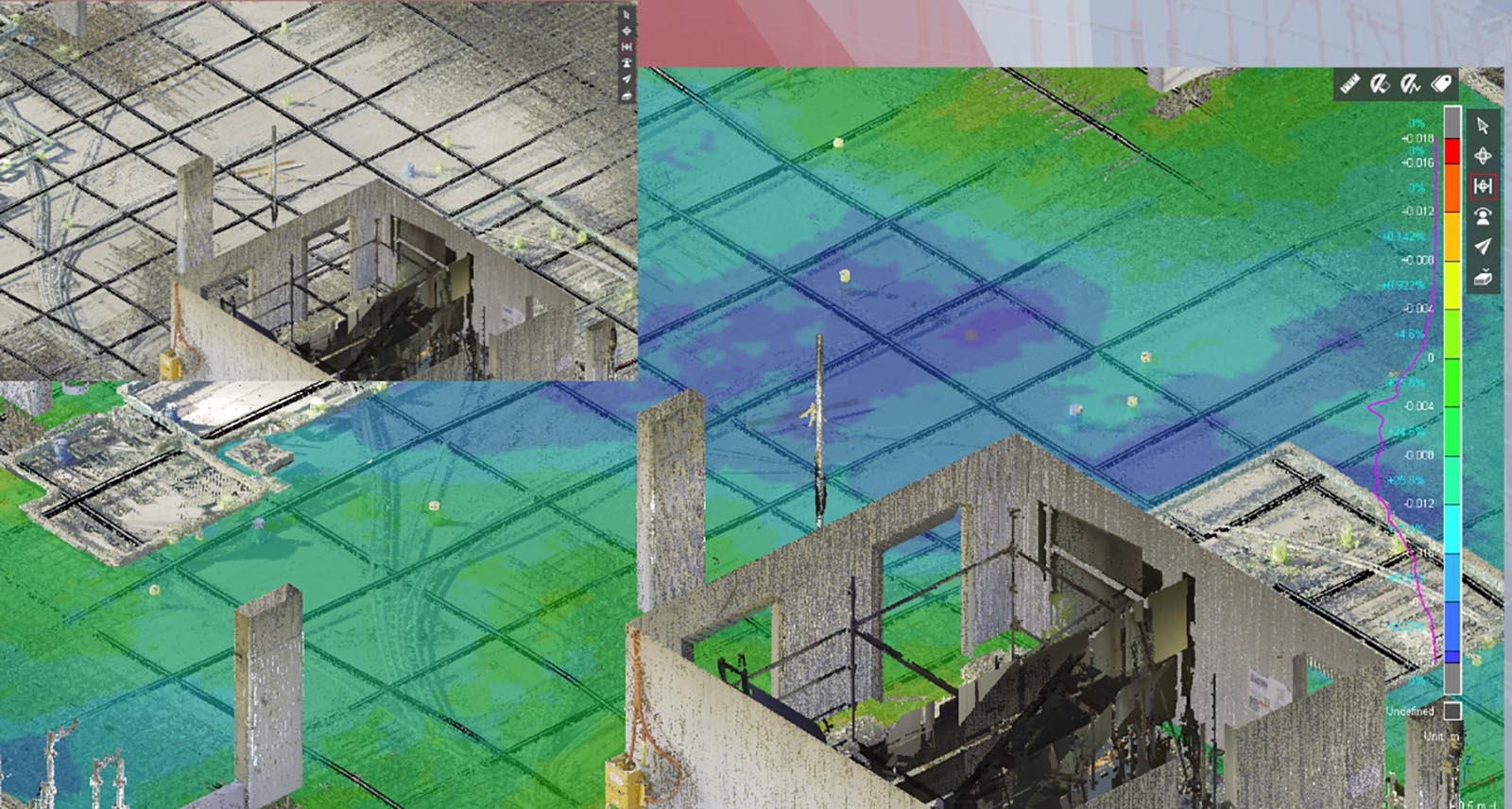 Comparison of stages 2 & 3 highlights the difference in the structure form between post pour and final form, including deflection, shrinkage, and heave.

When all four stages are laser scanned and documented, structural deformation risk can be mitigated, even prevented by having complete data from the start. The importance of this documentation is particularly evident for high rise buildings as decisions on whether engineering needs to be modified can be done at the time of the first slab.

Another benefit of having such data is for facility management when it comes to future developments and managing the lifecycle of the building. Whether upgrading an existing facility, altering its intended use, or simply maintaining awareness of its current state, accurate as-built models can be maintained for the lifetime of the facility.