Terrestrial Laser Scanning (TLS) has been used for underground surveys for more than a decade, and it is increasingly being used in the a exploration and research in caves. Tommaso Santagata from the virtual geographic agency Vigea has recently used Leica Geosystems laser scanning solutions in two cave surveys: an investigation of the morphological (form and structure) changes in the Lechuza salt cave in Chile and in the natural well ice cave in Italy.

Santagata explains how detailed scanning at intervals can offer insight into physical changes in cave environments, “Although most processes occurring in caves are relatively slow, some can be fast, such as erosion caused by flooding. These geological changes can be monitored by terrestrial laser scanning surveys and measured by comparing ‘before and after’ 3D models. It’s an interesting tool for making comparisons over time and is therefore increasingly being used in the study of climate change.” 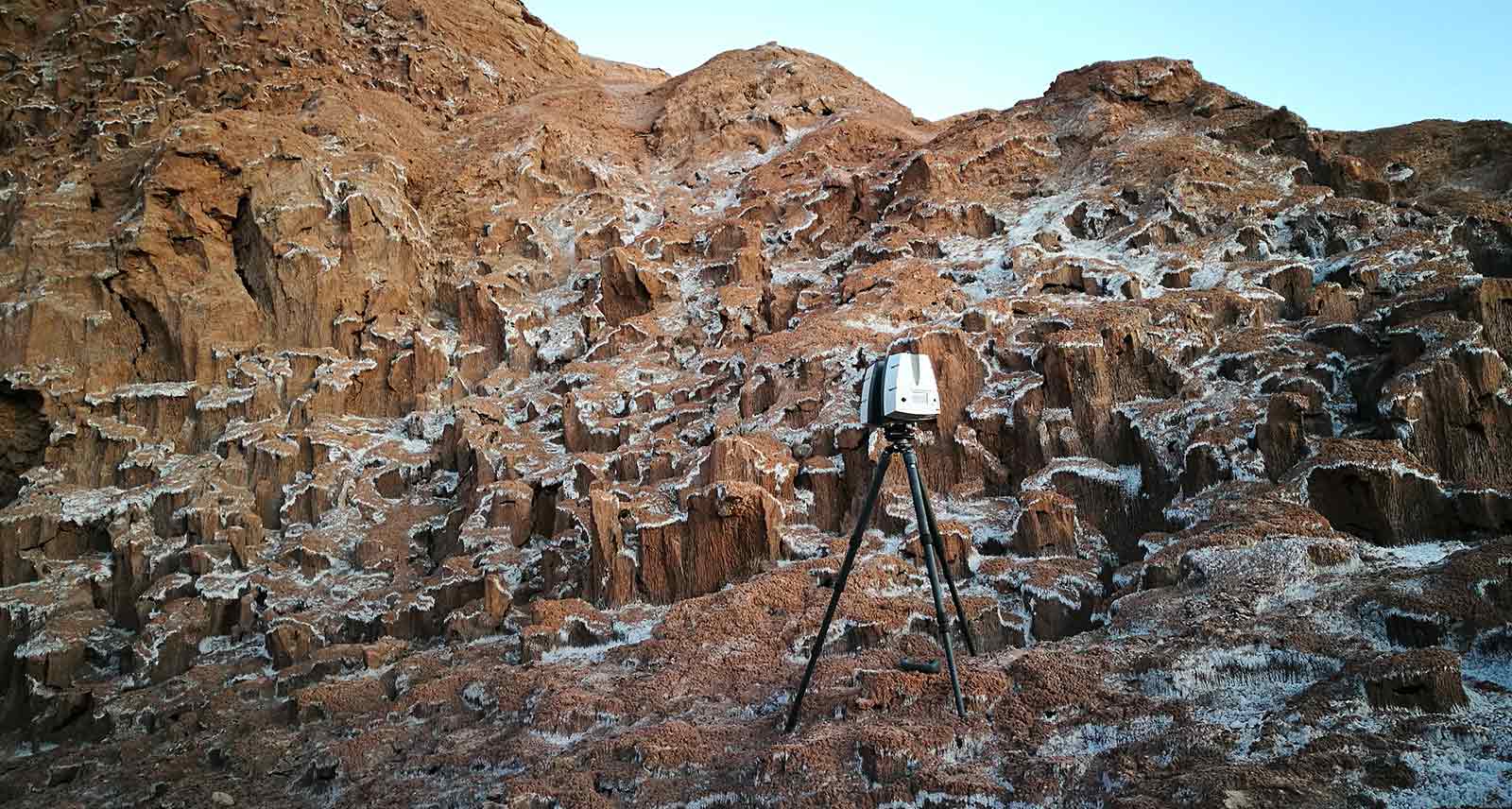 Close to the Chilean village of San Pedro de Atacama is an important cave, composed of Oligo-Miocene mineral deposit rocks, known as Cordillera de la Sal. Two surveys carried out in 2015 and 2018 allowed Santagata’s team to verify and measure small topographical changes in the cave due to a flood in 2017, which caused the river in the cave to flow and dissolve a measurable amount of halite - commonly known as rock salt.

In 2015, a complete 3D survey of the cave was organised by La Venta Esplorazioni Geografiche and the Commissione Grotte Eugenio Boegan of Trieste. The team used a Leica HDS7000 phase-based laser scanner to perform about 50 scans. In 2018, the La Venta team, in collaboration with the University of Bologna used a Leica ScanStation P40 to perform 68 scans, including about 200-metres surveyed in the external canyon upstream of the cave as part of the research project “Reading the salt caves of Atacama” supported by the National Geographic Society.

Lechuza data obtained in point cloud file format was subsequently analysed to identify areas where changes had occurred. Santagata explains, “Since very limited variations were found, it was necessary to recognise points in common and position the point clouds in the same origin and orientation to make comparisons. In at least three areas of the cave, collapses from the ceiling and erosion on the floor were recognised and digitised to obtain detailed sections of these parts of the cave. The comparison between these two surveys has shown that in this case, it was possible to accurately document the areas where detachments or torrential erosion occurred.” 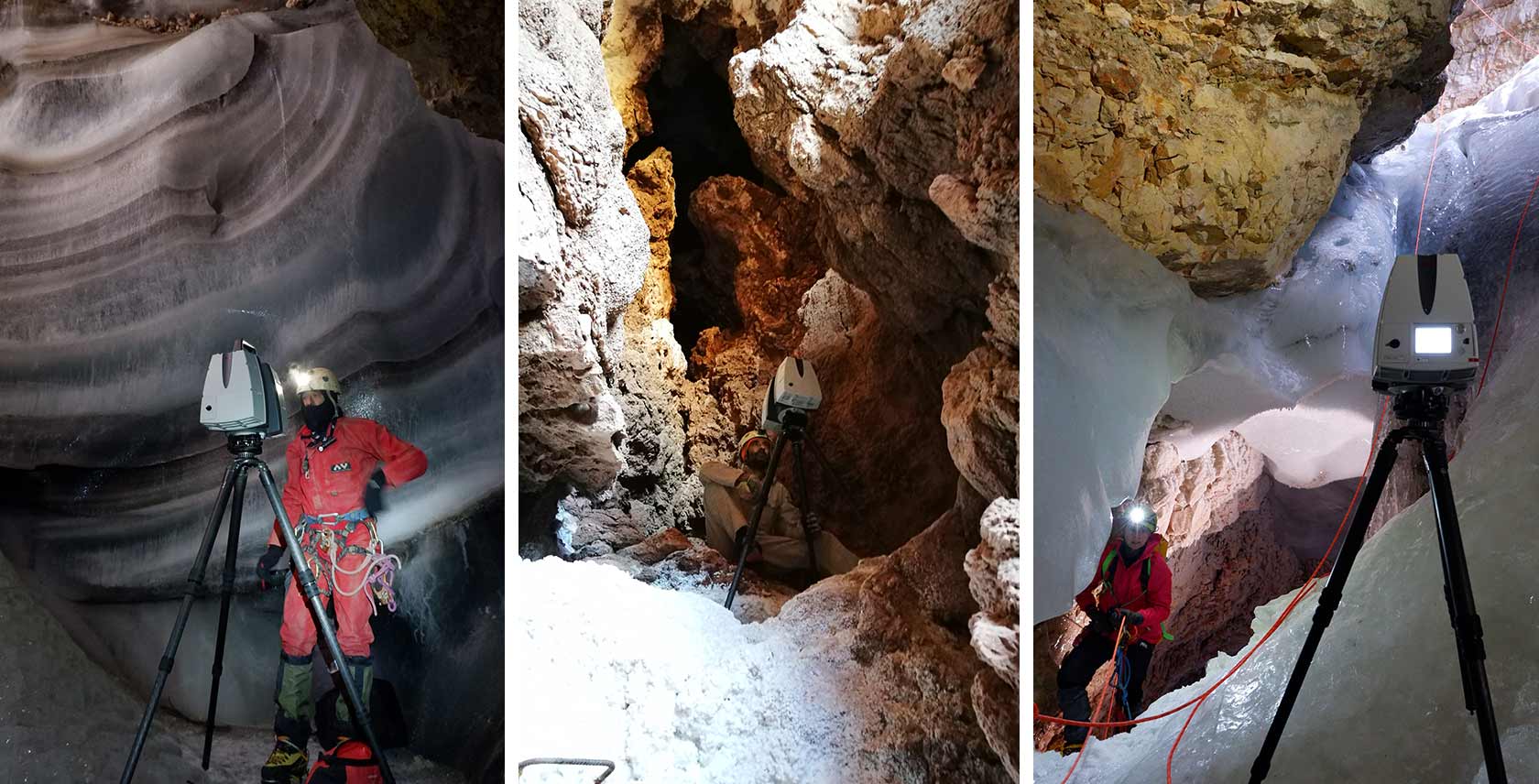 The second study concerns the underground ice deposit in the Cenote Abyss, one of the deepest and most voluminous caves of the Italian Dolomites. The 280metre-deep ice cave was discovered in 1994 after the entrance opened as a result of the abrupt emptying of a small lake in the Regional Park of Fanes, Sennes and Braies. The cave’s vertical entrance consists of a massive 130metre-thick layered ice deposit; at the lower limit of the ice-filled entrance part a shaft opens – ice-free and 165 metres deep – leading into a dome-shaped chamber occupied by a cave rock glacier.

Laser scanning surveys carried out in 2015, 2016 and in 2018 allowed Santagata’s team to estimate variations due to collapses and acquire data for a complete monitoring project. The first expedition in October 2015 included a complete 3D laser scan survey of the final chamber using a HDS7000 phase-based laser scanner. This survey has provided the detailed volume of the chamber (420,000 m³) as well as a first record of the position of the ice masses hanging from the ceiling and of the rock glacier at the bottom. During this expedition and in subsequent ones in 2016 and 2018, other parts of the cave were 3D scanned using a ScanStation P40. 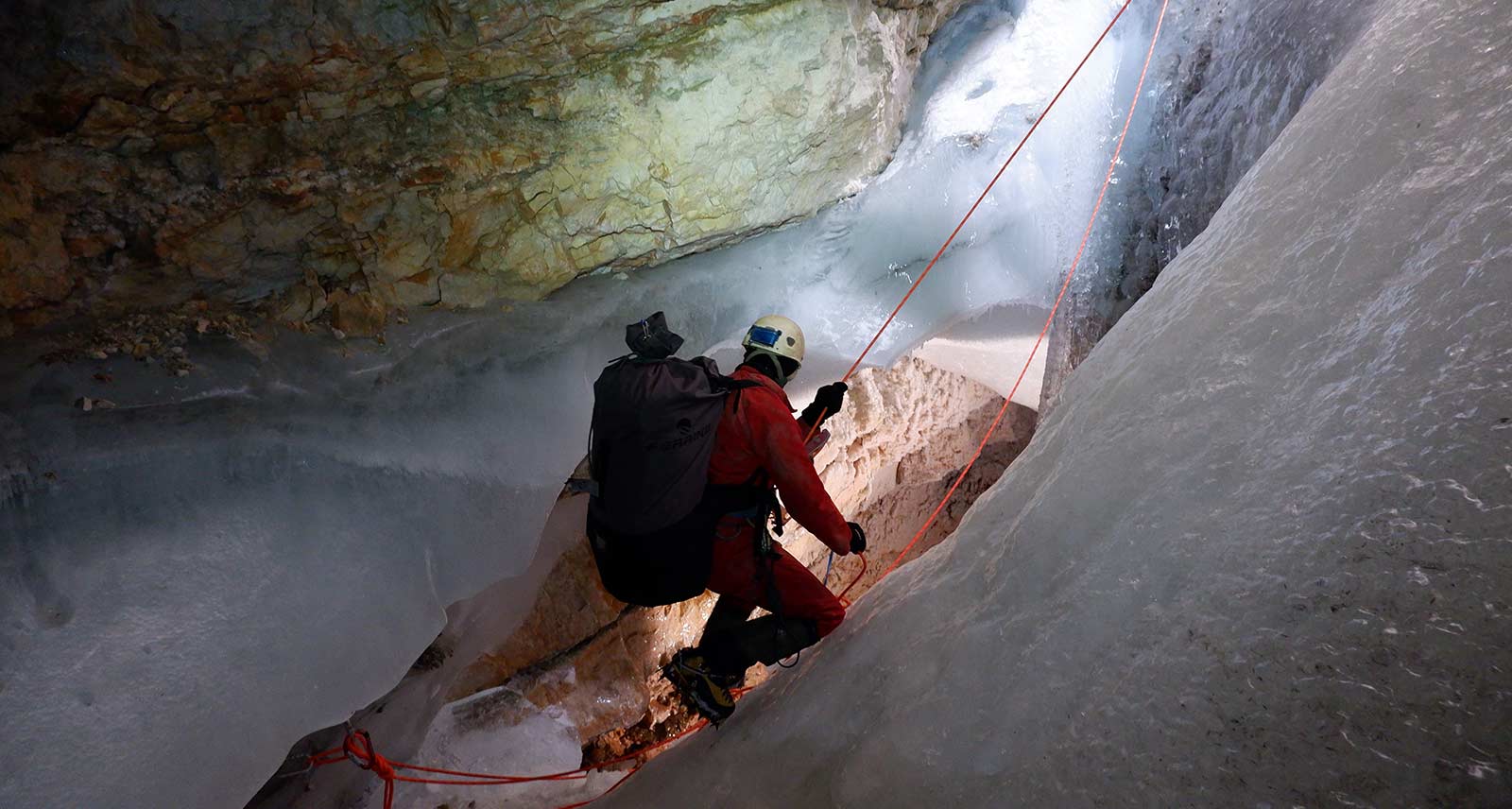 Santagata explains, “Due to the ice filling in some passages in the following years, it was not possible to repeat the survey of the final chamber (this will be a goal for future expeditions). However, the data acquired in these years in the upper part of the cave has allowed us to study the changes that have taken place in the first two rooms near the entrance. In particular, a collapse was highlighted in one area, which led to the enlargement of a passage occurred after 2016. This area was 3D scanned before and after the collapse and the acquired data allowed us to verify the detachment and quantify the volume of rocks collapsed.”

Point clouds were compared using two different methods: firstly we ran a quick comparison between the two datasets in order to understand where to focus our more detailed analysis. Secondly, we extracted several ‘slices’ of the areas of interest. We exported these areas for a complete digitisation, to have a better estimation of the volume of rock collapsed, about 61m³.” 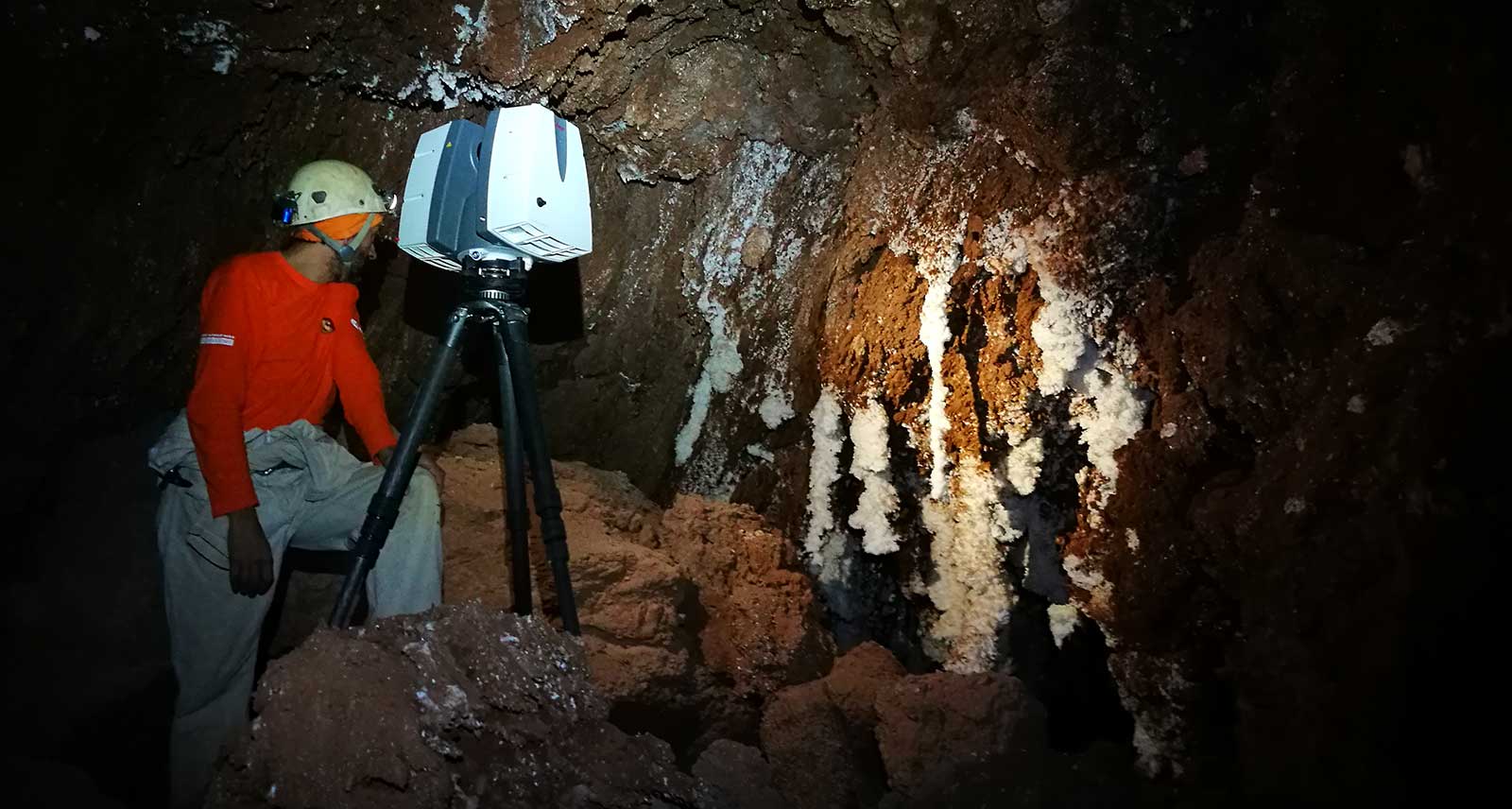 The studies show that 3D laser scanning is a useful measuring technique for highlighting changes to natural structures. The data obtained can be used to help interpret other geological information, Santagata says, “For example, the variations highlighted by comparing the Lechuza cave studies provided interesting data that can easily be correlated to the rainfall that occurred in this area between the two survey campaigns.”

“In the case of the Cenote Abyss, the collapses probably occurred due to temperature variations, considering that the area is subject to oscillations between surface and cave temperatures recorded by temperature and air pressure sensors installed in the cave. A detailed environmental monitoring of this area of the cave is ongoing and the repeated 3D models will allow us to understand if these processes are important for the origin and development of ice caves in the Alps.”

The Lechuza cave expeditions were organised by the Association La Venta Esplorazioni Geografiche with the scientific support of the BIGEA Department of the University of Bologna and with the collaboration of the Commissione Grotte E. Boegan in 2015. The scientific expedition in 2018 received funding from the National Geographic Society and was realised with the support of CONAF Chile. The Cenote monitoring is a multidisciplinary project organised as part of the Inside the Glaciers project with the collaboration of La Venta, BIGEA and the Regional Park of Fanes Sennes and Braies with the collaboration of Studio GST and Eli Friulia, the Speleo Club Proteo of Vicenza, the Gruppo Grotte Treviso and the Gruppo Speleologico Padovano.