Despite being hundreds of thousands of kilometres apart, the island of Lanzarote and the Moon share remarkable similarities. The Spanish island, belonging to the Canary archipelago in the Atlantic, is home to the world’s largest volcanic cave and exceptional scenery that resembles the lunar landscape. So much in fact that the island has been chosen as a location for astronaut training ahead of space missions. More recently, Lanzarote’s Corona lava tube has helped prepare teams at the European Space Agency to explore and study caves of similar characteristics observed on the Moon and on planets like Mars.

As a result of the latest advancements and innovation in geospatial technology, several field surveys were conducted in 2017 led by Tommaso Santagata from the Virtual Geographic Agency Vigea, deploying 3D Terrestrial Laser Scanning (TLS) and Mobile Mapping solutions, resulting in the first ever 3D replica of the largest lava tube on Earth.

Exploring the depths of the Corona lava tube 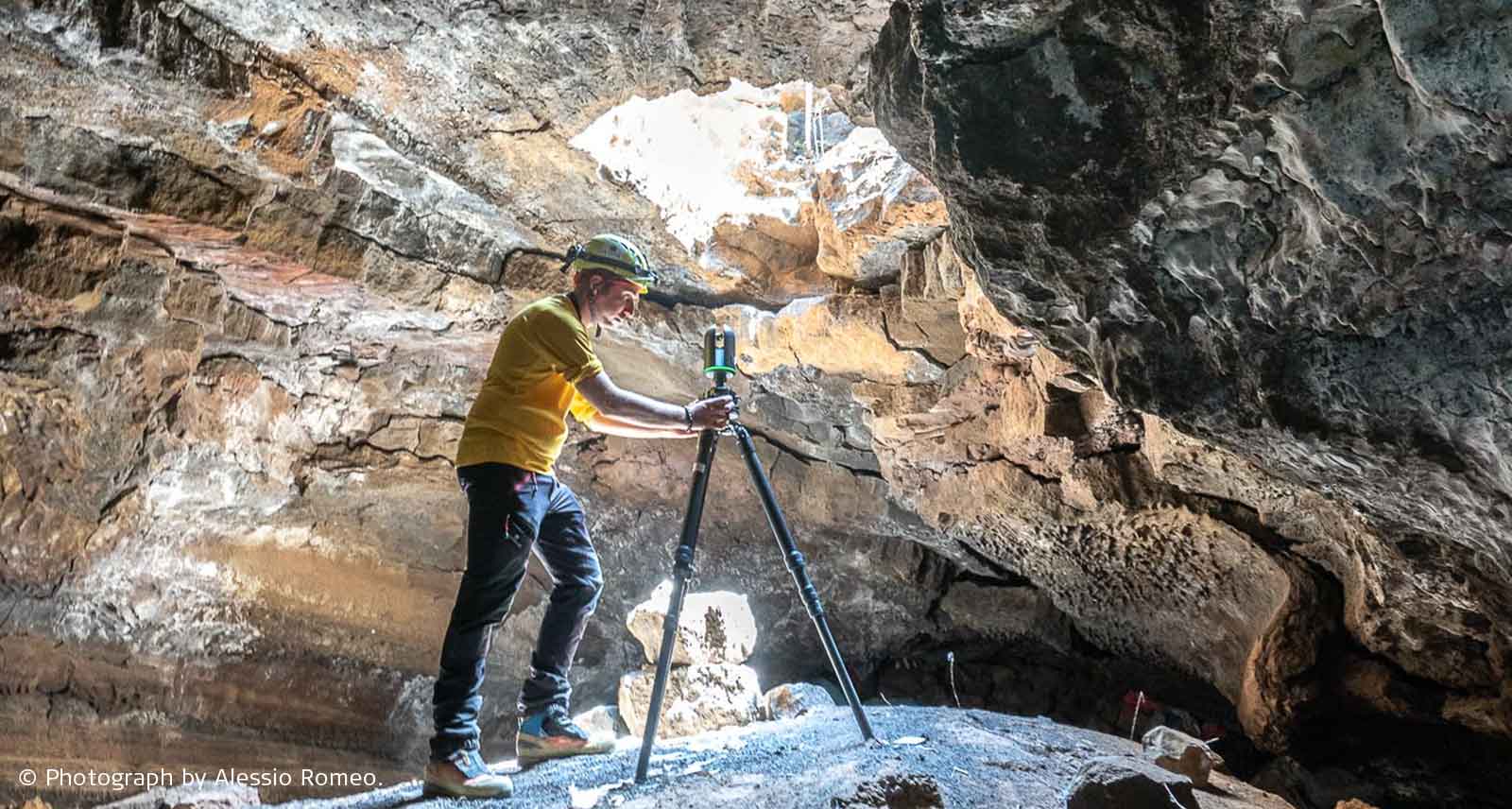 Located in the north of Lanzarote, the Corona lava tube extends over 8.5 kilometres and is made up of both dry and submerged passages, with some sections more than 25 metres wide. Although the first explorations and initial mapping began in the seventies, its real extension was practically unknown until the early sixties when the first topographic survey was carried out. This latest and most ambitious 3D scanning project, commissioned by the local government, Cabildo de Lanzarote, also implemented the latest mobile mapping technology, which is part of the European Space Agency’s training course PANGAEA-X. This training allows them to test new instruments and technologies that will be used in future space missions.

In order to successfully execute this project, various field surveys were completed over the course of a year deploying a variety of Leica Geosystems solutions, including the Leica HDS7000, Leica ScanStation P40 and Leica BLK360 laser scanners, as well as the Leica Pegasus:Backpack mobile mapping solution. The result is the largest 3D replica of a lava tube on the planet with 5.7 kilometers of cave passages mapped.

Capturing every detail with the latest laser scanning technology 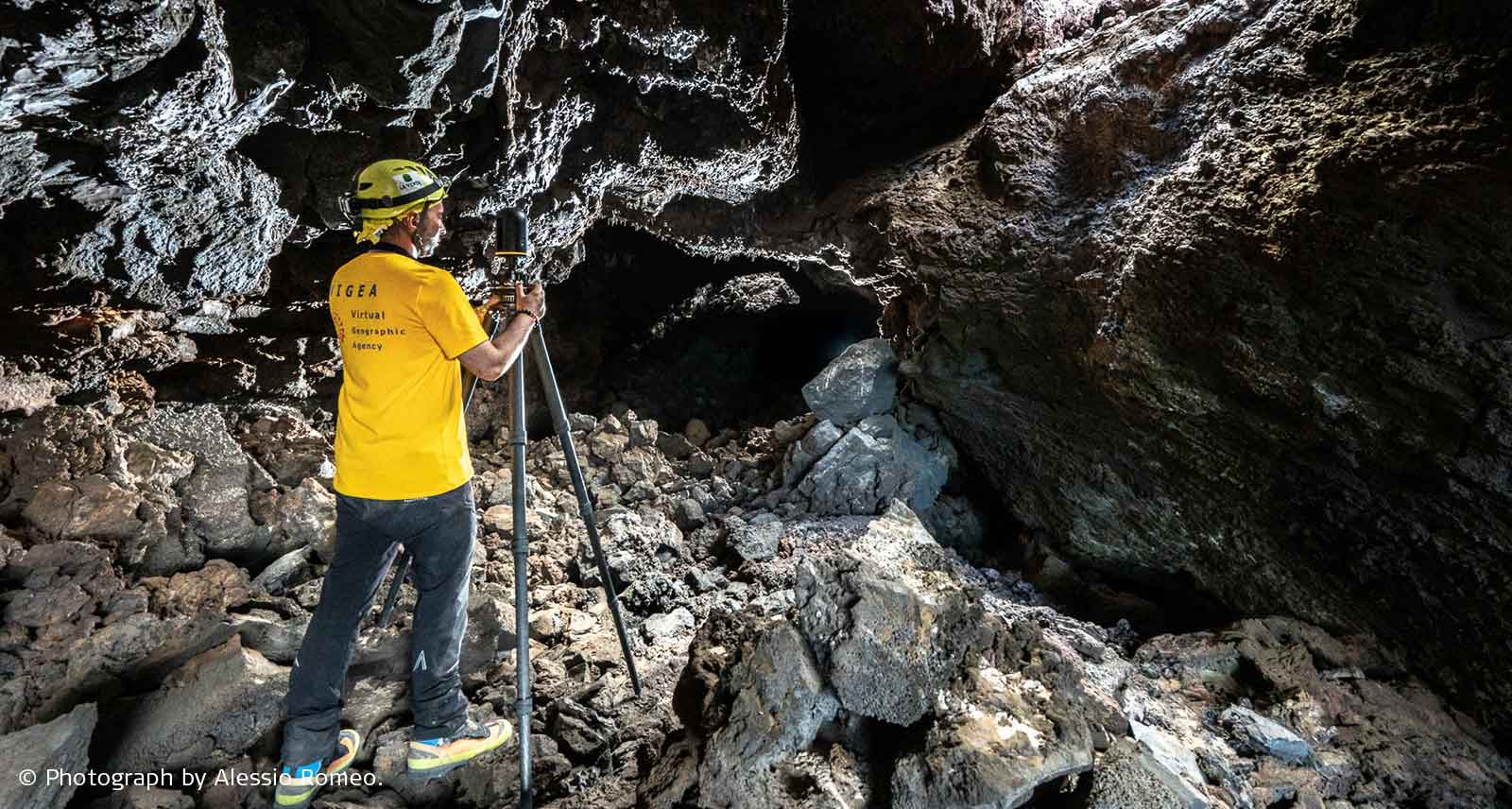 Three individual surveys and over 440 scans were completed to map the lava tube system, composed of different sections connected to each other through external collapses. These collapses were used to geo-reference the laser scanning surveys performed inside the cave on the external surface. This was made possible with Global Navigation Satellite System (GNSS) measurements, Light Detection and Ranging (LiDAR) data from the Spanish Geological Service, and through photogrammetry data obtained with unmanned aerial vehicle (UAV) flights along the cave path.

More specifically, 800 metres of the above sea level passages were mapped using the HDS7000 and an estimated five kilometres using a ScanStation P40. In addition, the BLK360 imaging laser scanner was deployed to scan an upper level of around 300 metres during the PANGAEA-X expedition.

Increased accuracy and mobility with the Leica Pegasus:Backpack

To generate an even more detailed 3D map, a survey was performed using the Pegasus:Backpack mobile mapping solution. Designed to capture 3D data in overground and underground environments, with images and point clouds collected by five cameras and two LiDAR profilers. Its lightweight and ergonomic structure allowed teams to comfortably navigate the difficult terrain and to instantly visualise the data on a handheld tablet computer.

“Due to the intricate and subterranean nature of the lava tube system, the Pegasus:Backpack was deployed to acquire fused SLAM data — starting and ending in outdoor environments with GNSS data, but largely exploring the cave without satellite coverage,” explains Tommaso Santagata, Co-Founder of Virtual Geographic Agency Vigea 3D and an expert on Lanzarote’s volcanic cave system. As the lengthiest part of the mission was carried out without any GNSS information, the second phase of the data processing was to reinforce the calculation of the path recorded using a SLAM algorithm and the information obtained by the LiDAR mounted on the Pegasus:Backpack.

Processing the data and creating the final 3D map 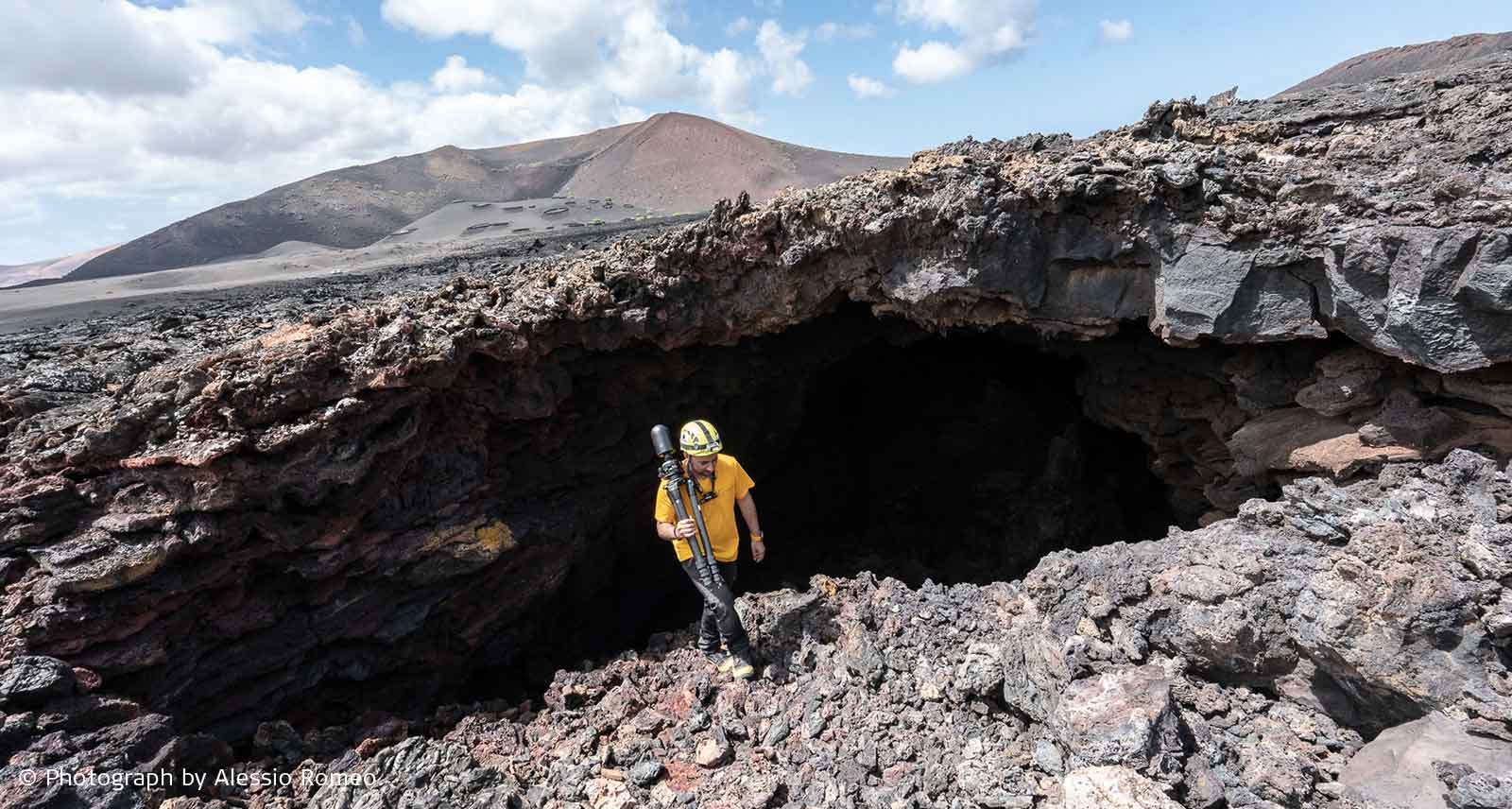 “Having gathered large amounts of data — 400 GB corresponding to the raw laser scanning data alone — the Leica Cyclone 3D point cloud processing office software was then deployed to align the scans and process a unified point cloud of the cave,” says Santagata. “Once the 3D map was available in a single point cloud, several outputs were generated as topographic maps with plans and sections of the lava tube.” In addition, the data was subsequently used to produce comparisons with other lava tubes on earth, with the objective of studying similar features on the Moon and Mars — this operation was performed using the Autodesk AutoCAD 2017 software.

Aside from its scientific purposes and training for future space missions, the data was also used to produce multimedia and interactive contents like video animations, virtual reality and desktop applications showing the wider public the lesser known parts of the Corona lava tube system. Only limited sections are open to the public at Cueva de Los Verdes and Jameos del Agua. Furthermore, the results of this project were presented during an event on the management of touristic caves organised by the Cabildo de Lanzarote in 2019, where a virtual reality stand was installed to show the cave to the public. 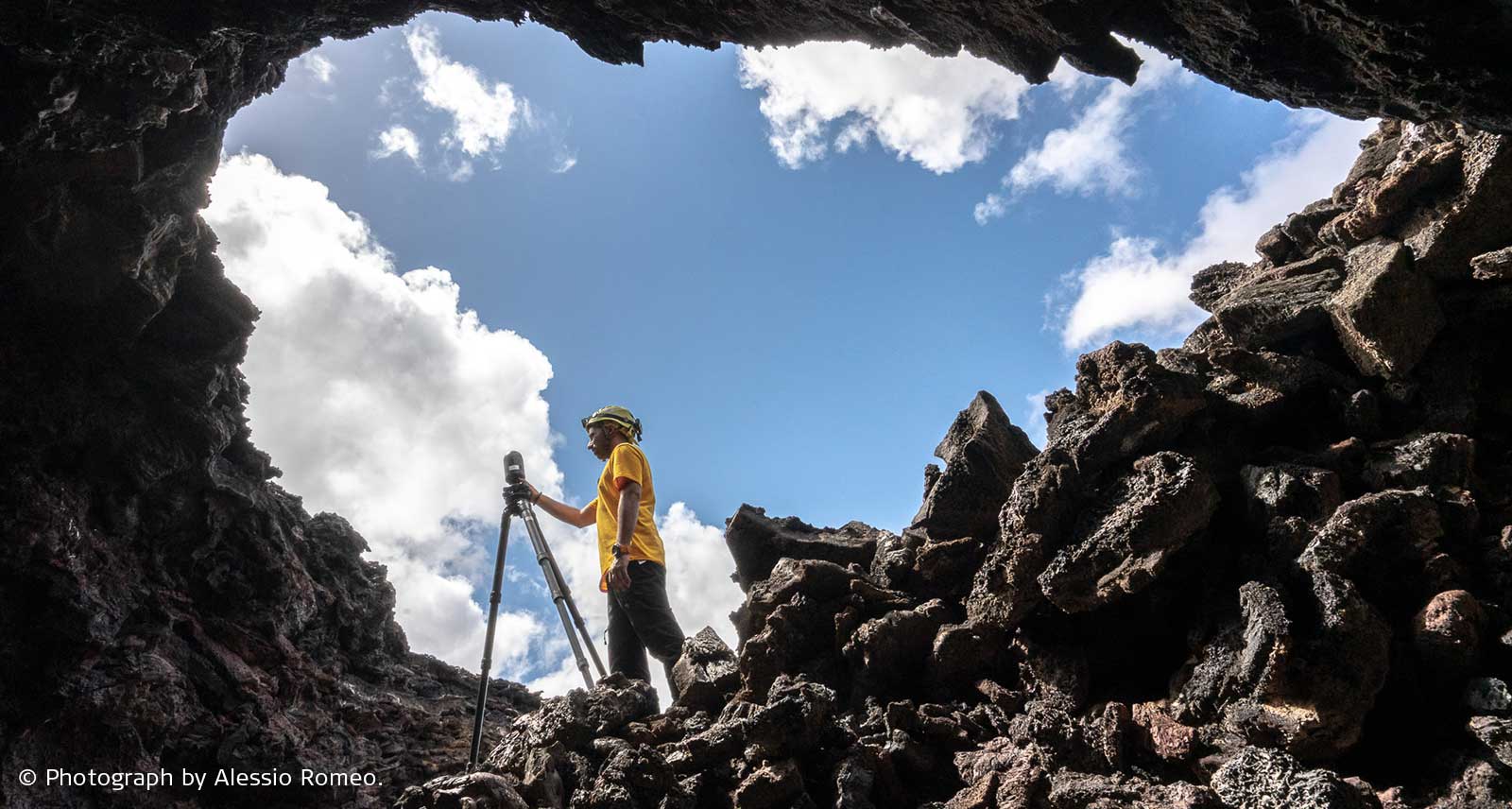 In spring 2021, Santagata returned to Lanzarote to support a microbiology research project. The Tubolan project, led by Ana Miller, geomicrobiologist at the Institute of Natural Resources and Agrobiology of Seville (CSIC), was set up to study the microbial organisms living in the Lanzarote lava tube systems. The team’s findings will help those searching for life on the Moon and Mars, which also have lava systems. Although the conditions are different to those on earth, the Martian and lunar cave systems could theoretically also support chemolithoautotrophic microorganisms that survive and grow by using and transforming minerals. In the framework of the Tubolan project, Santagata used a Leica BLK360 to make scans and 360 degree videos – contributing to the study of caves’ formation and uncovering more of the caves’ geography than ever before. The amazing video footage taken can be watched on VIGEA’s YouTube channel.