Listen to Emmanuel's story on HxGN Radio's Digital Realities Podcast. Now streaming on all your favourite podcast platforms. Would you like to be featured in our next Digital Realities podcast? If you have a story about your own projects to share, please email us at digitalrealities.geo@leica-geosystems.com.

In Spring 2022, French engineer and 3D data specialist Emmanuel Durand stood among the rubble of a children’s library housed in a historic building in Chernihiv, Ukraine. With the Leica BLK360 imaging laser scanner in hand, he intently captured the damaged structure after a bombing in March left it in ruins. Later, he processed the scans to depict the scene with transparent layers, providing a unique perspective on the vast damage: Surviving columns and arches stand beside demolished walls bordered by a metres-deep crater, a digital reality with striking dimension. 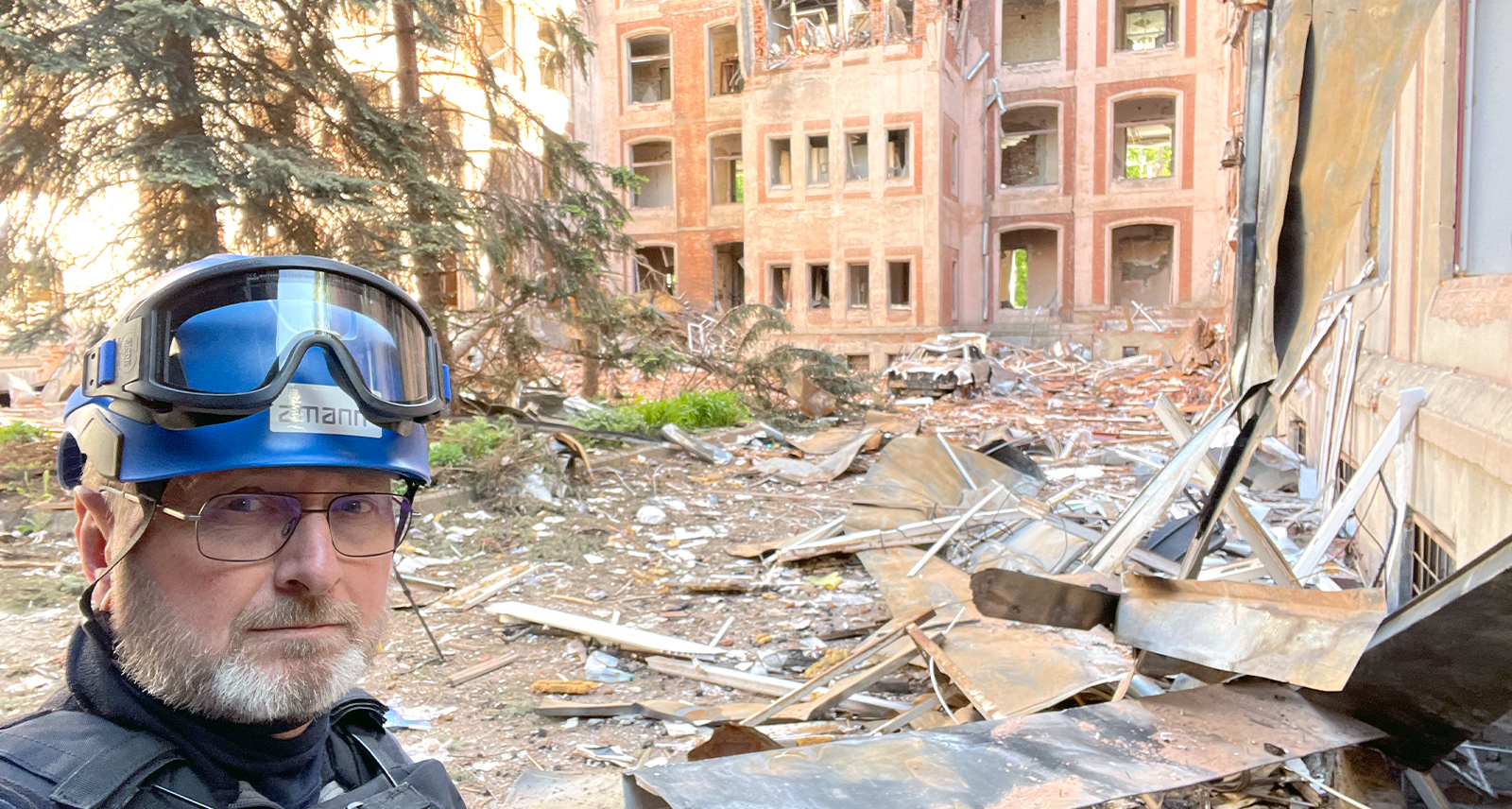 Emmanuel Durand surveys the devastation of a University in Kharkiv.

Durand scanned several damaged heritage sites just like this one during his 17-day stay in Ukraine. There is a short window of opportunity, he contends, to document damage in vivid 3D detail after destruction ends but before debris and artefacts are cleared away. In this moment, he does more than scan a structure – he captures a significant moment in its history.

Laser scanning, now an established technology for historical preservation, provides visually impactful and forensically, architecturally, and historically valuable data to document and communicate the impact of war on heritage sites. With an official invitation from Ukraine’s Ministry of Culture, Durand travelled throughout Ukraine’s war-impacted regions using scanning to capture buildings identified by cultural experts, preserving them at a critical moment in time.

Durand, the founder and owner of Amann Engineering based in Geneva, Switzerland, specialises in scanning and analysing the structural integrity of large and industrial sites. Being his own boss means he has the flexibility to say yes when opportunities arise for volunteer work. Therefore, when the need to document historic structures in Ukraine arose, he felt called and able to go.

Having scanned and analysed the silos impacted by the 2020 Beirut port explosion and subsequent monitoring of the silos, Durand had already demonstrated his expertise in scanning and digitally documenting sites facing critical damage. However, the experience in Ukraine was completely unique, including the logistics of scanning in a war zone, traveling by night train and having to find creative solutions for capturing collapsed structures.

Accompanied by architects, engineers and cultural experts at different stages of his journey, Durand travelled to Lviv, Kyiv, Kharkiv, and Chernihiv to capture heritage sites. Starting in Lviv, he joined local 3D scanning specialists from Skeiron, a small business committed to preserving Ukraine’s cultural sites through laser scanning and 3D modelling. Together they scanned the large and ornate St. George’s cathedral, inside and out.

“I helped them with my BLK360 G1 for half a day and they scanned with the Leica ScanStation C10 and ScanStation P20. It was like a training session for me in a quiet, and very beautiful and safe environment,” reflects Durand. “Still, in Lviv, I heard sirens for the first time, about twice a day. Of course, in the beginning it was scary, but for the people in Lviv this is almost life as usual.”

From Lviv, Durand’s journey took him to Kyiv, Ukraine’s capital, and he quickly learned to cope with the routines of life in a country at war.

“I took the night train because it’s the safest way to move in Ukraine. It really is an experience. On the one hand, the train is very comfortable, each wagon has a babushka, or ‘mama’, making you coffee, and everything is well organised. At the same time, the train is almost empty, and you can’t look out or see anything because the curtains are pulled down to prevent light leaks. The windows are also covered in a transparent film so that in case of a nearby bombing, they will not blow out into the train,” says Durand.

Greeted in Kyiv by architects and a museum director, the newly formed team travelled to a village about 40 kilometres from the Russian border where they required special authorisation to enter. Closed off to everyone else besides military personnel, Durand recalls the contrast from populous city to desolate countryside:

“Imagine how it is to drive from Kyiv, a bustling city that looks like Paris, but with less people at the moment, onto a highway where there was no one, only exploded tanks along the side of the road. Then we arrived in Chernihiv, a city that has suffered extensive damage, and here was my first war scan.”

The children’s library was the first scanning location, housed inside a historic building, formerly a museum.

“Walking inside among the rubble,” Durand remembers, “the ceiling was falling, the books were blown from their shelves. It was very complicated to scan, and for this the tool of choice was the BLK360. I scanned inside and outside for a total of one billion points at the library.” 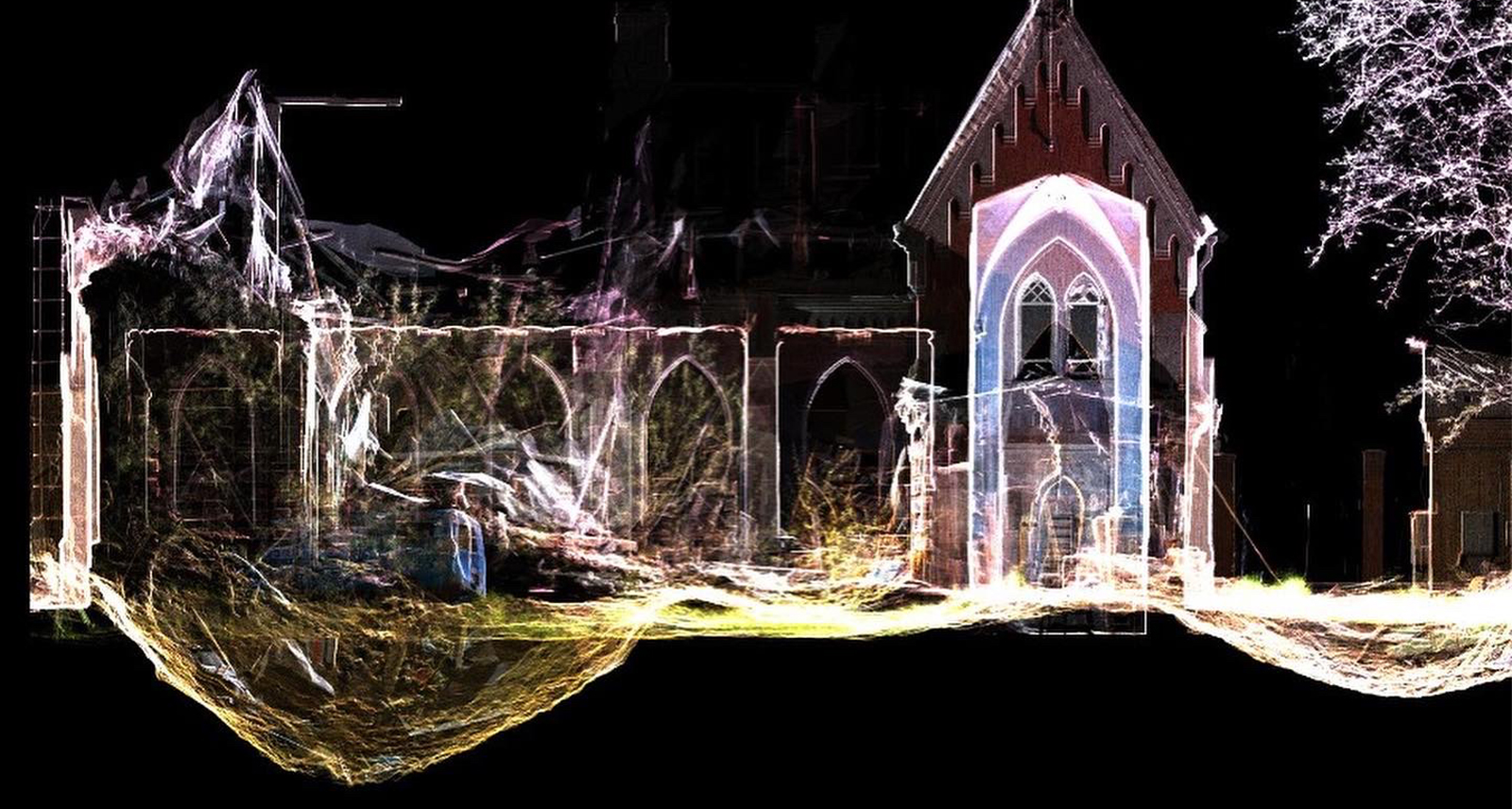 Transparency applied shows the devastation of a historical church in Chernihiv in detail, including a crater left in the ground.

“We spent the night in Chernihiv, and it was like a ghost town,” Durand continues. “Like on the train, we had to close our curtains so no light escaped and curfew was at 10 p.m. The hotel shuts down all night, and you stay in the dark until the sun rises and you are allowed to go out in the morning.”

The second day, Durand scanned a church south of Chernihiv. The journey to the site, only a few kilometres away, required hours of driving since the main bridge to the village had been destroyed.

“The church site was very special because it was in a small, almost deserted village. It was used as a base by the Russians to store munitions and is now surrounded by destroyed Russian military vehicles. Despite rain and burnt trucks absorbing the lasers, the data is still very good.” 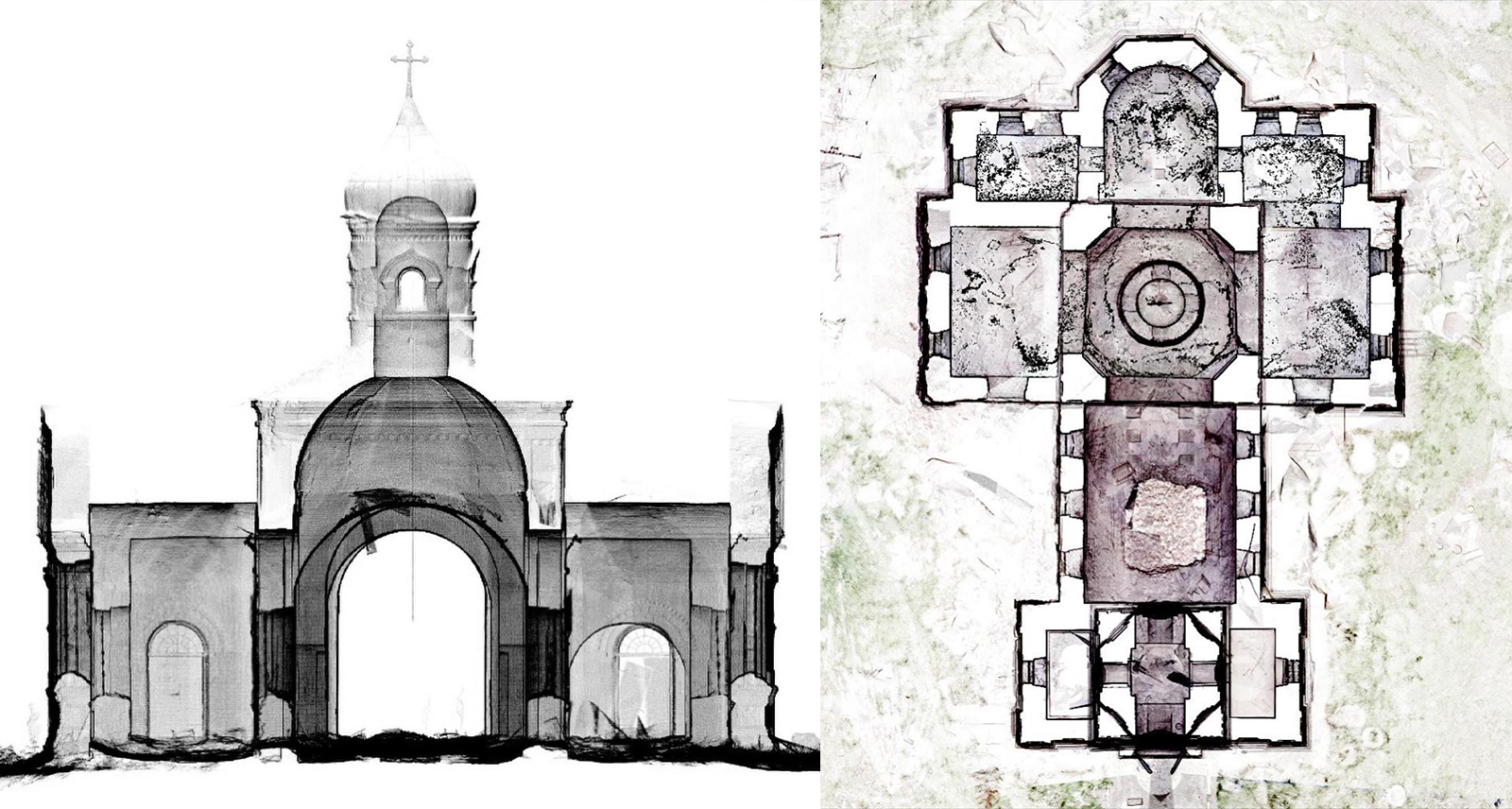 Venturing still further towards the front, Durand and team journeyed to hard-hit Kharkiv, the first place where Durand heard shelling in the distance. Here they scanned three sites, including a hospital, fire station and university. Scanning at high resolutions from many setups in a fragile environment meant each site required at least three hours to scan. In some cases, the degree of damage meant that Durand and team needed to employ creative solutions to overcome challenges where safe access was limited.

“The fire station was a historical building from 1887, beautiful brick, in one of the oldest parts of the industrial area. I used the BLK360 from the basket at the end of a fire truck’s hydraulic ladder to achieve a kind of flying LiDAR capture at 30 metres high: a scanning first for me. This allowed very good data of the roof, despite small movements of the ladder.” 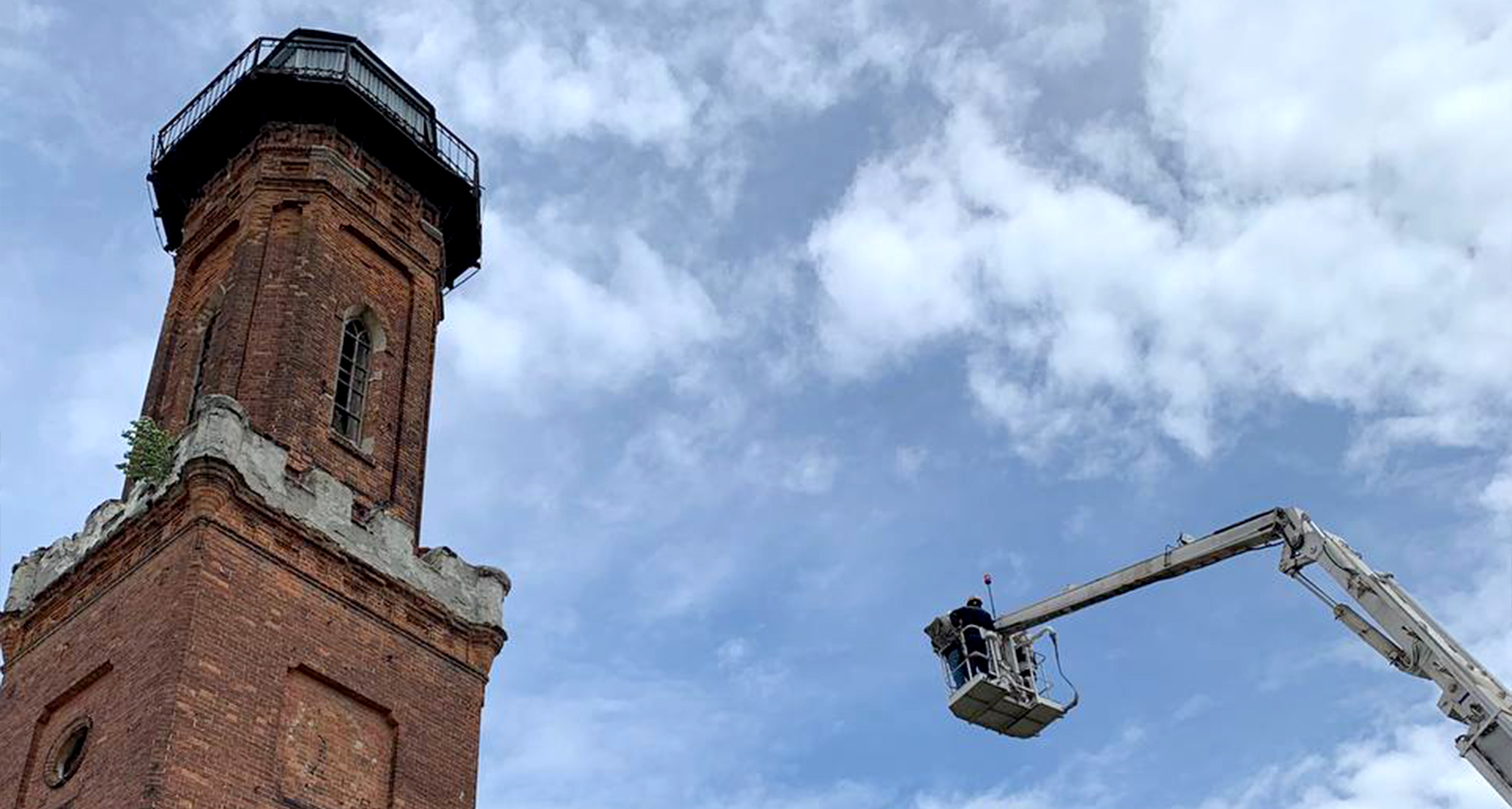 Durand utilises a fire truck’s hydraulic ladder to get a scan of a historical fire station in Kharkiv. 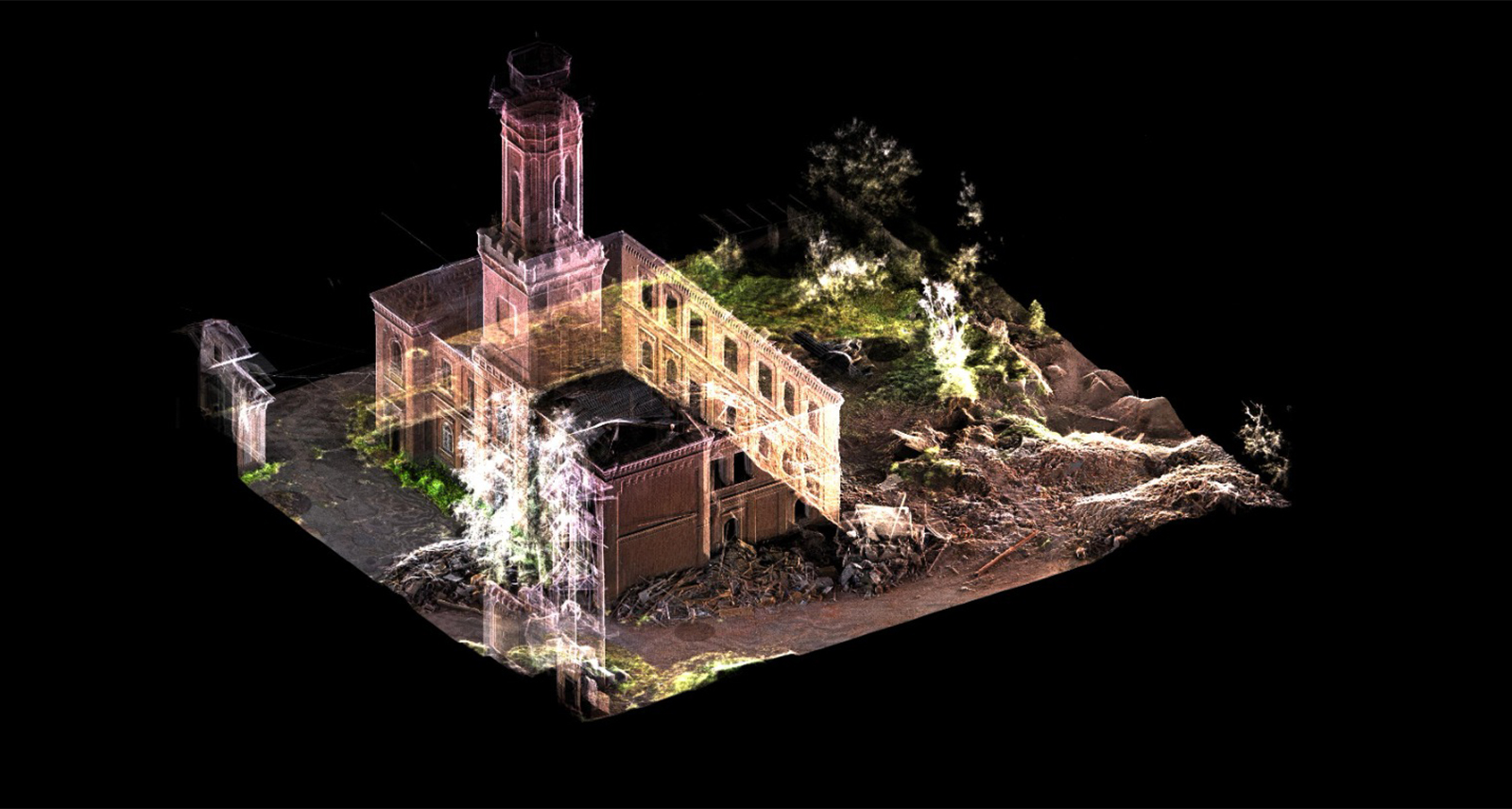 Final 3D rendering of a historical fire station in Kharkiv.

Durand also scanned the Faculty of Economics building at Karazin National University in the centre of the city, which was destroyed by a Russian missile in March. The damage was so extensive that the possibility to scan was limited:

“I focused on the courtyard inside, which was extremely graphic, and the roof. I used the BLK360 with an extension rod that allowed me to go more than three metres high. By sending the scanner through a hole in the roof and controlling the scan with the app, I was able to scan places that would otherwise have been too dangerous.” 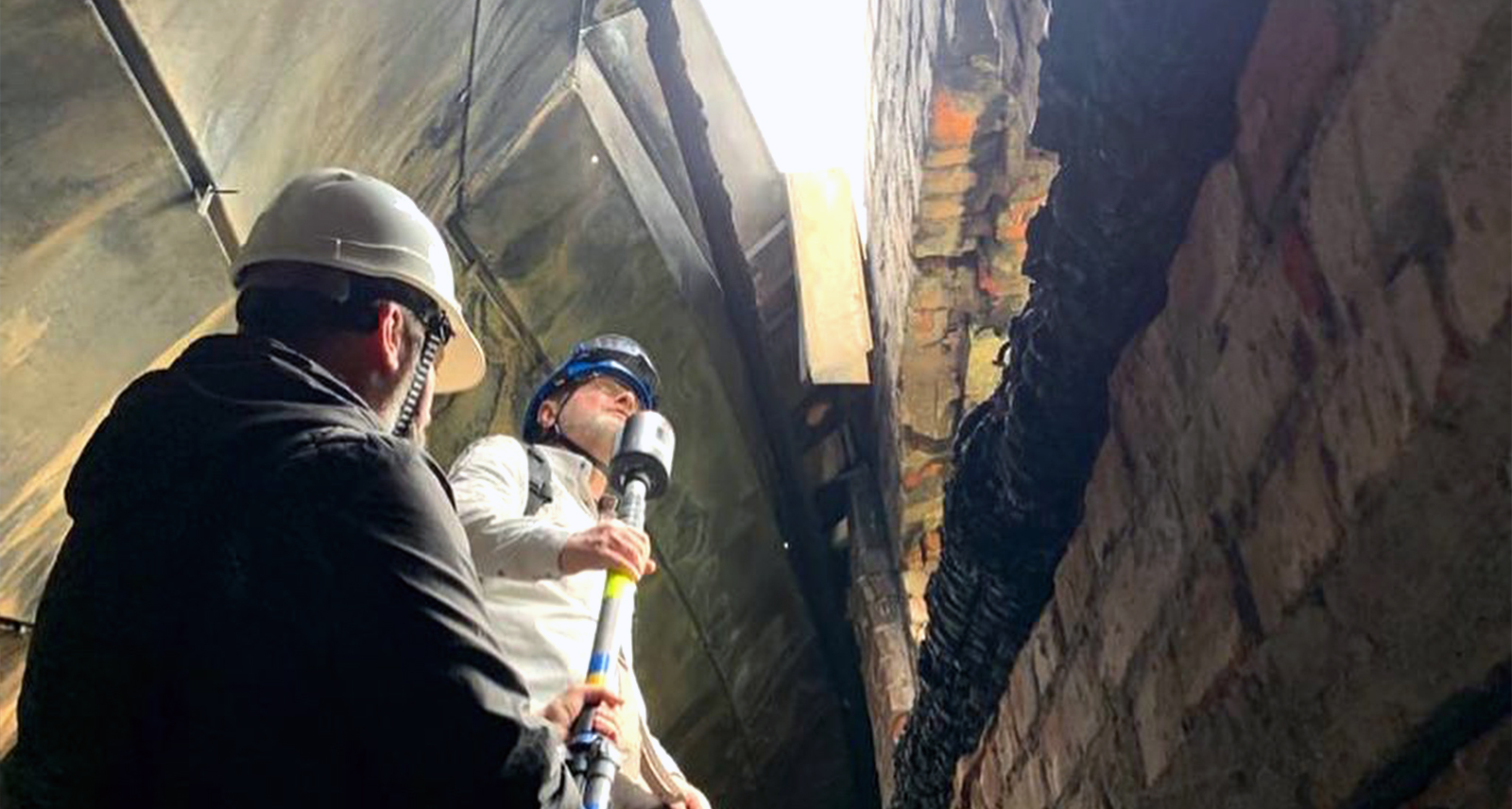 In damaged areas too dangerous for Durand to stand and scan, he lifts the BLK360 scanner out to scan for him as seen here at the Faculty of Economics building at Karazin National University, Kharkiv. 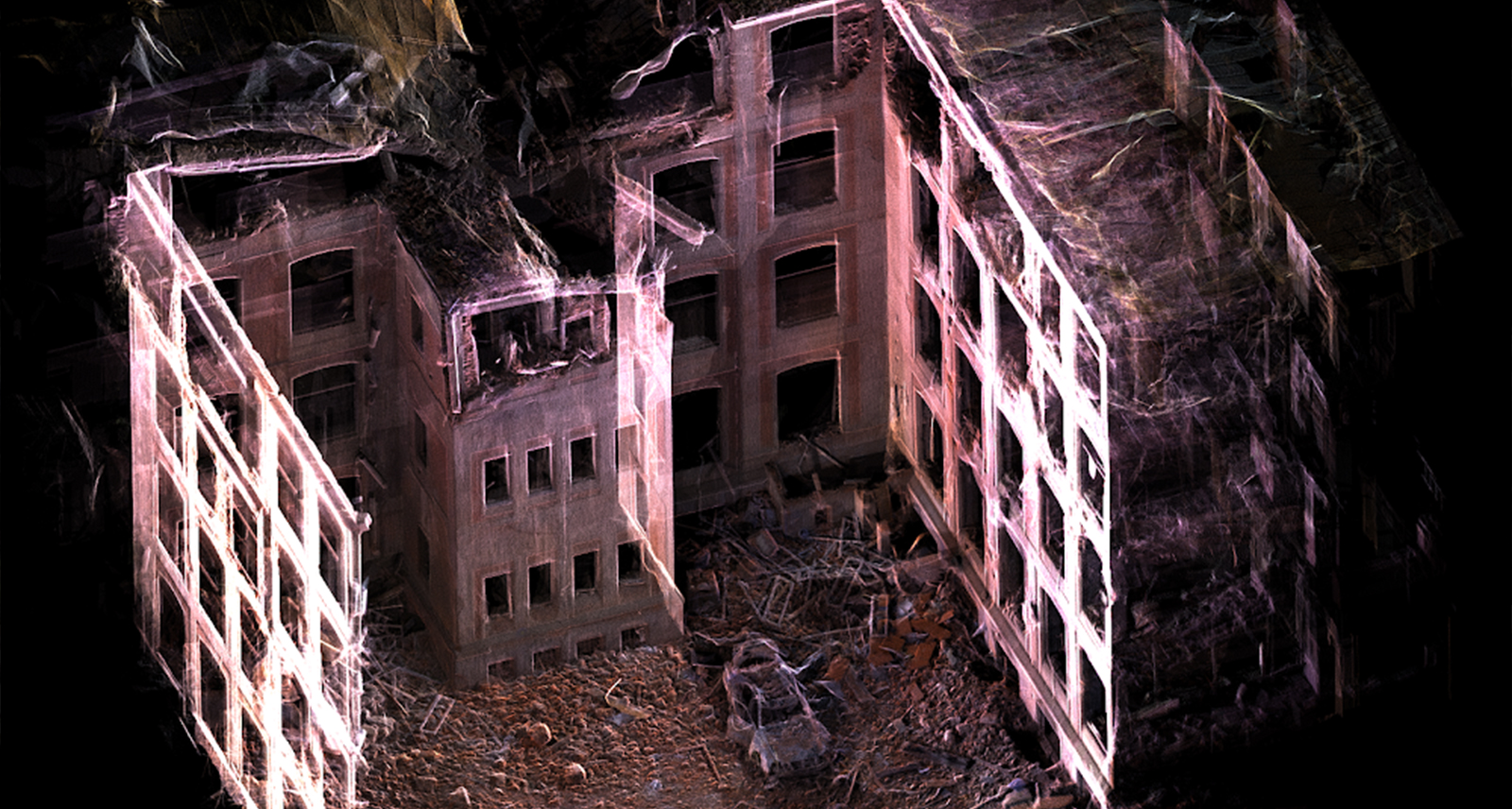 3D rendering of damage at the Faculty of Economics building at Karazin National University, Kharkiv.

Upon his return to Kyiv, Durand wanted to scan the Irpin Bridge, which had been destroyed by Ukraine to stop the Russian advance west of Kyiv. Although the bridge was not formerly considered to be historic, Durand persuaded the team that this was a site that was, at that very moment, becoming a significant landmark.

“This has become a very emblematic place,” Durand explains. “They have already decided to keep this destroyed bridge as a symbol. And one important use of these scans today is for communication. Ukraine is already using this data to communicate with the world, and say ‘look, this is the damage that has been done’.” 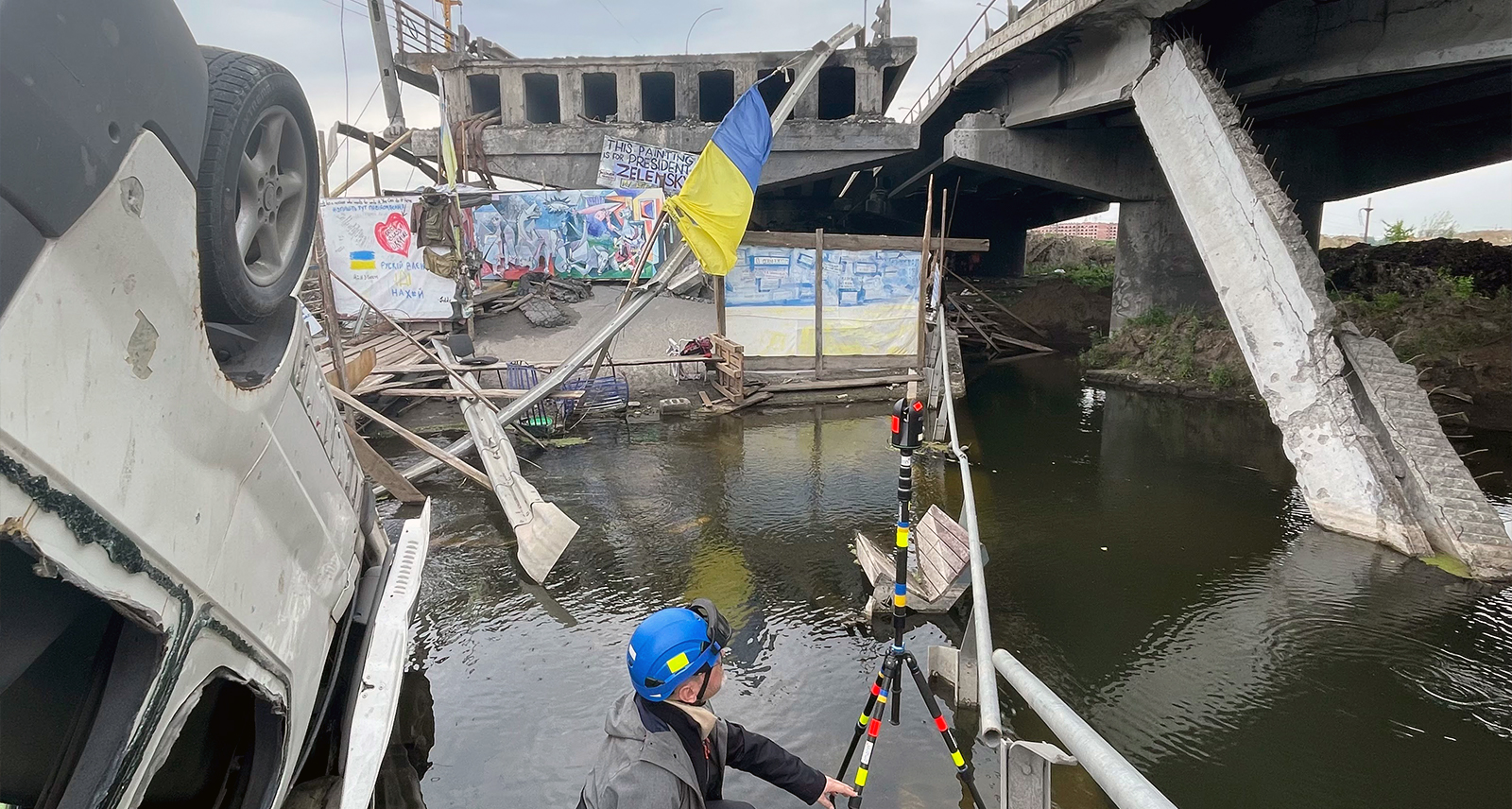 Emmanuel Durand scans the destroyed Irpin bridge with the BLK360 in the outskirts of Kyiv. 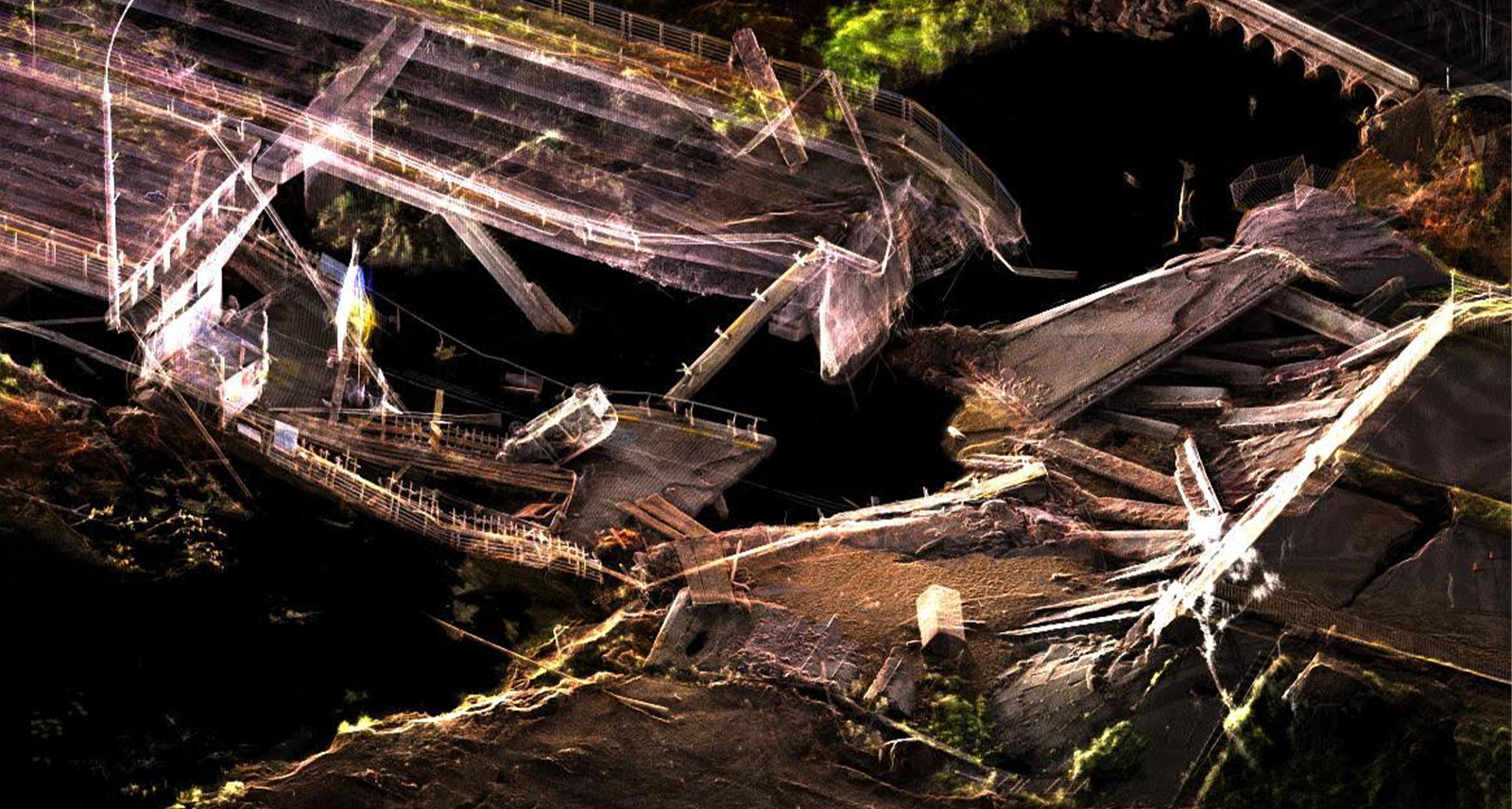 3D rendering of the destroyed Irpin bridge on the outskirts of Kyiv.

Although Durand’s scans depict significant damage, he ultimately sees them as an ingredient in the larger process of rebuilding and cultural commemoration in Ukraine.

“The laser scan brings a different light, angle and perspective to a particular scene, something that has not existed in that way before,” Durand explains. “For example, just applying transparency to a point cloud allows people to immediately get a greater sense of the damage, like with the crater at the children’s library. And this is not available through a photograph alone.”

“What I’ve done in Ukraine is really a first step. Producing point clouds is like making flour – it’s a key ingredient that others will use to bake a variety of things. In the short term, these can be used for communication, to sustain attention on Ukraine and connect them to resources from international institutions, grants for preservation work and rebuilding.”

“Longer term,” Durand continues, “this data can be used for forensics and investigations, and architects can use it as a basis for reconstructions. These scans will also become part of history.”

“What we are doing with scanning gives a different depth and dimension to the depiction of what has happened in Ukraine,” summarises Durand. “In one way it is hopeful, because it is already a step forward to rebuilding.” 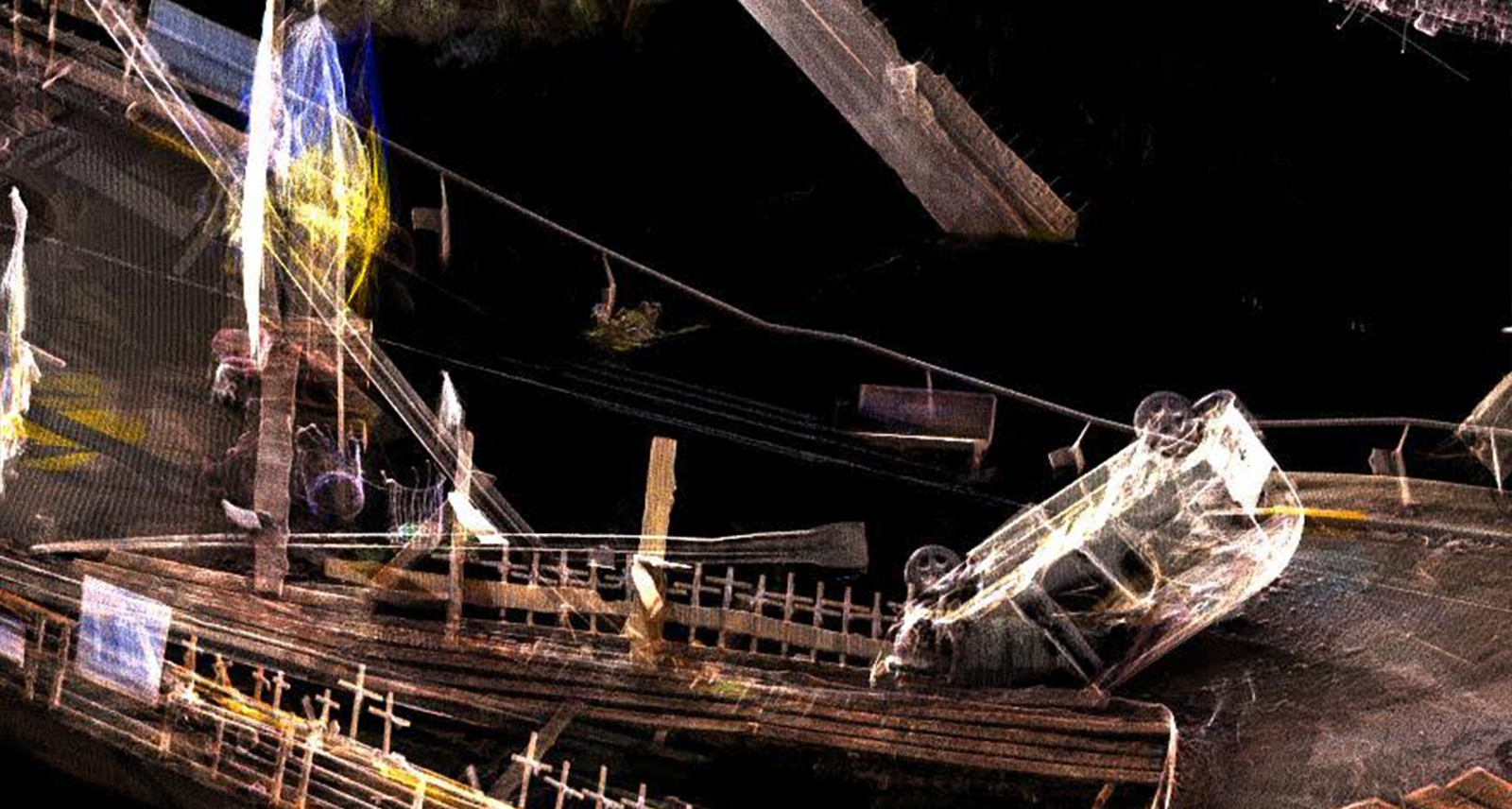