The Perito Moreno glacier in Argentina is one of the most important natural tourist attractions in the world. Its surface has been studied by explorers and geologists since the 19th century, but cavities in the glacier are too dangerous to explore on foot. In 2017 a research project organised by the Italian La Venta Esplorazioni Geografiche and the French Spélé’Ice associations set out to study the entrance to a cave at the edge of the glacier using Terrestrial Laser Scanning (TLS) and unmanned aerial vehicles (UAVs). One of the aims of the project was to record information that could be used in the future to study how fast glacial ice is melting. The three-dimensional scanning data collected was later used to create an interactive 3D map, which the team has made publicly available.

Getting closer to the Perito Moreno glacier using 3D mapping 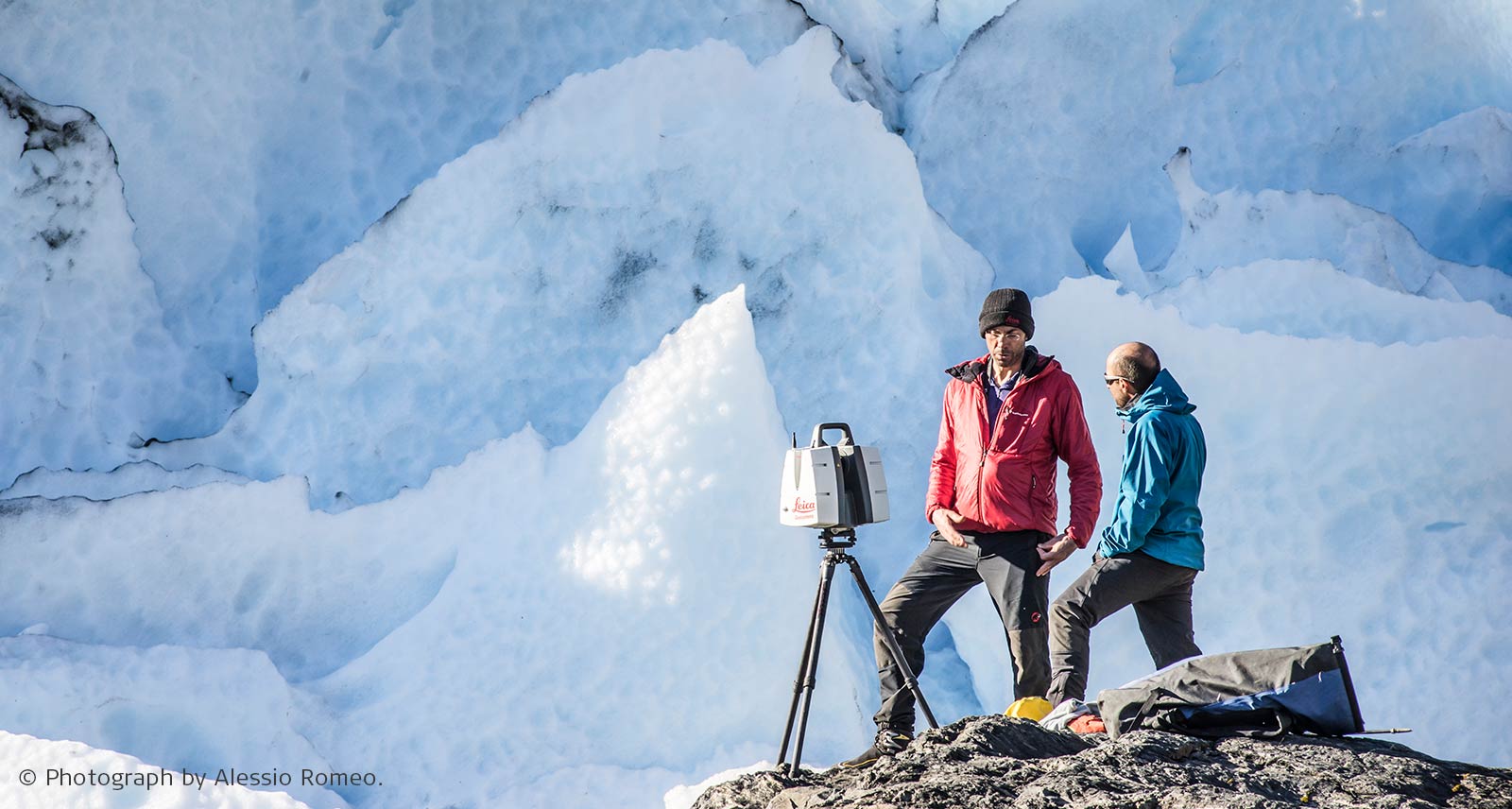 The Perito Moreno Glacier is located in Los Glaciares National Park in the Southern Patagonian Ice Field, the largest temperate ice mass in the Southern Hemisphere. It has an area of more than 250km² and extends 30 km from the Lago Argentino East towards the border with Chile West. Its relatively stable condition has made it one of the most famous tourist attractions in Argentina, drawing nearly one hundred thousand visitors each year.

Little is known about the caves of the glacier because they are too dangerous to explore; there is a constant fall of large chunks of ice from the cave ceilings. As part of the MaGPat Project (Microorganisms and Glaciers in Patagonia), La Venta Esplorazioni Geografiche and the French Spélé’Ice organised one of the first cave surveys of the area in 2017. The main objectives for the researchers were to investigate the micro-organisms living on the glacier and to map as much of the cave as possible. The only cavity that could be studied was an interesting contact cave excavated by a stream that directly feeds the glacier. A Leica Geosystems laser scanning solution was used to realise a 3D map of the first tens of metres inside the cave and the cave entrance.

Detail from a distance with the Leica ScanStation P40 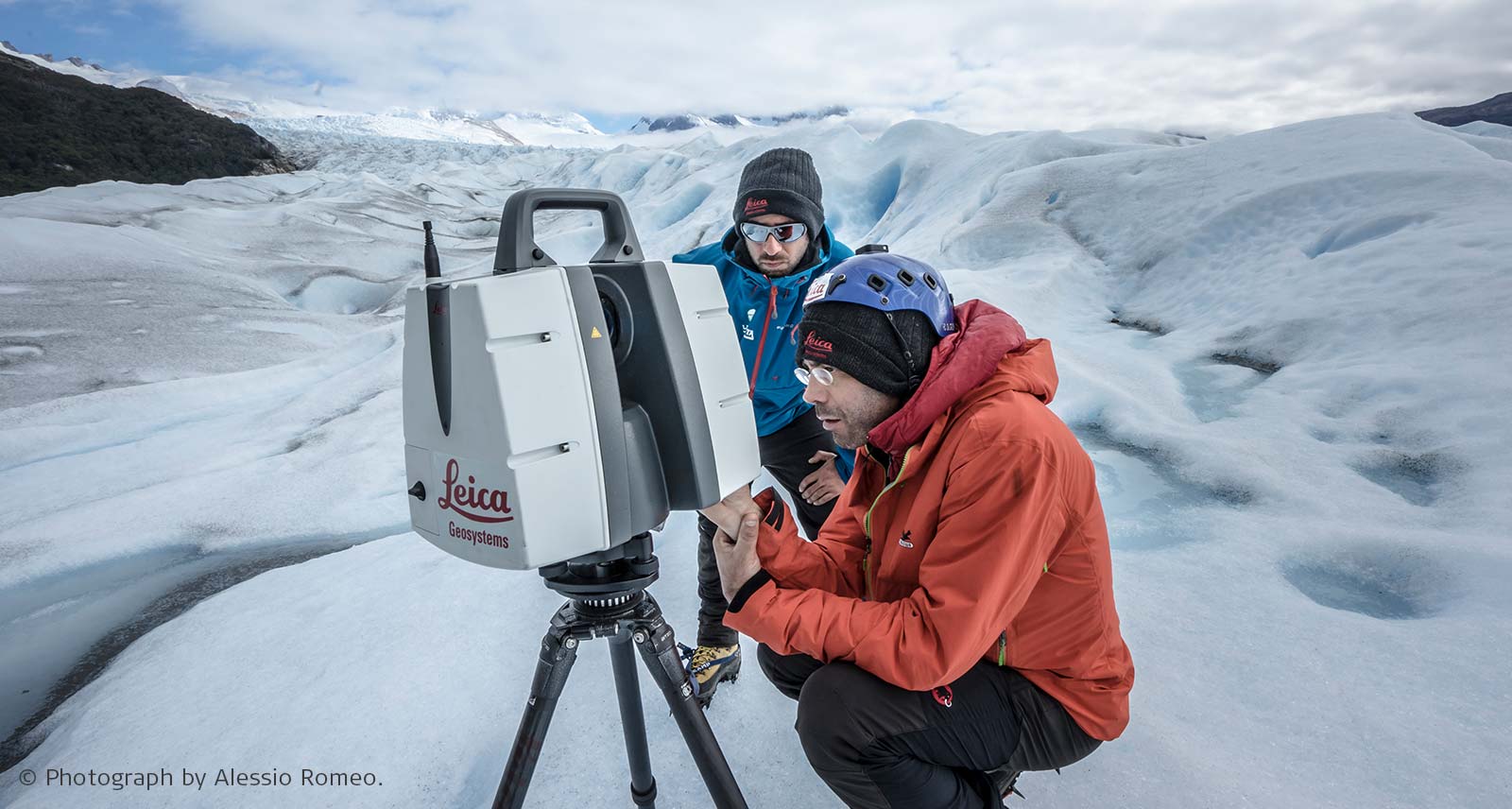 3D laser scanning technology has proven transformational for geographic surveys, explains Tommaso Santagata from La Venta, “These techniques are increasingly used in geological studies, such as in caves or for the calculation of ice surfaces and changes in ice volumes. 3D laser scanning technologies can acquire millions of points represented by 3D coordinates, at very high spatial densities on complex multi-faceted surfaces within minutes. The dense point clouds contain a huge amount of data that can be used for representation and analysis.”

In the Perito Moreno study the team used a Leica ScanStation P40, which can capture high quality 3D data and High-Dynamic Range (HDR) imaging at a long range of 270 metres. The survey-grade 3D laser scanner was positioned at a safe distance to acquire data on the surface of the glacier and the cave entrance. It was controlled using a Leica CS35 tablet computer, which the team also used to check partially processed data while they were still in the field. In this way they were able to make sure the survey was progressing as planned, while still able to make changes. A dedicated camera integrated into the scanner was used to produce coloured point clouds and take 360° panoramic images.

Santagata explains the process, “About eight laser scans were performed to acquire the necessary data. These operations took about two hours and were realised in the late afternoon in order to have the area not directly illuminated by the sun. Laser scans were produced with resolutions of 6mm and 3mm (which represent the distance of each single point measured at 10m from the laser scanner) and acquiring photographs with the internal camera of the instrument.” In addition, photogrammetry flights were carried out with UAVs flying from 30 to 70m heights.

The Leica GS16 - a self-learning GNSS smart antenna - was used to acquire measurements, both for ground control points for the photogrammetry survey and to measure velocity and elevation changes along a north-south strip of the glacier. It was also paired with the CS35 tablet computer so that data could be processed directly in the field. 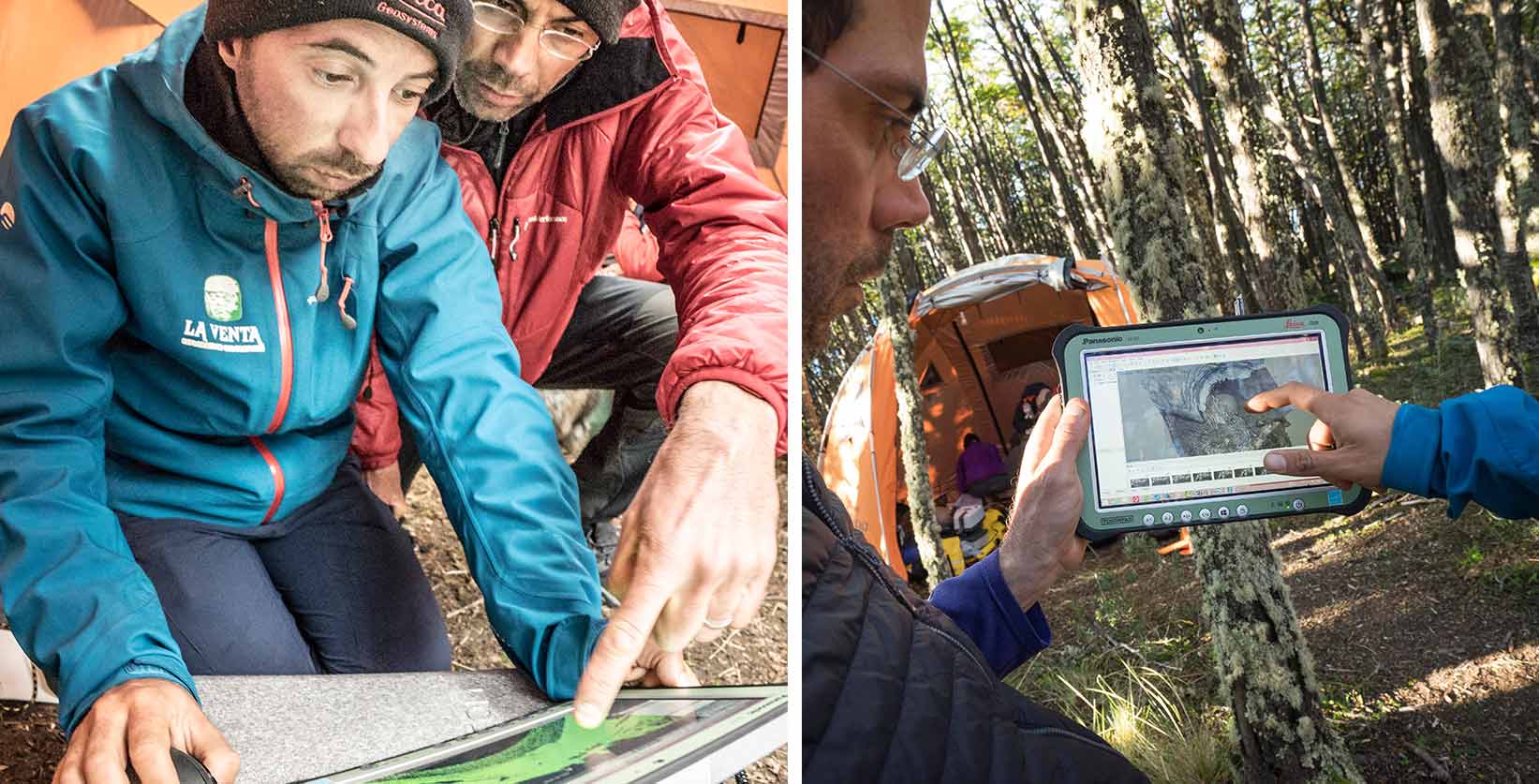 The survey team used Leica Cyclone 3D point cloud processing software to align the point clouds and create a 3D model. The model was then processed further with Leica Cyclone 3DR to create the project deliverables. Cyclone 3DR handles most industry-standard formats so the team was able to merge the laser scanning data with images taken by the UAV to create the model they required. To share the 3D data with colleagues outside the team, Santagata used Leica Geosystems’ free JetStream Viewer, which lets anyone - even those without any 3D modelling experience - easily view and manipulate point clouds.

Sharing information with the scientific community and beyond

Santagata explains that the detailed 3D models of the glacier give researchers an accurate record from which to measure changes in the ice: “The possibility to have such technologies in the right moment and right place allowed us to use them to obtain data that can be used in the future to compare the evolution of this part of the glacier.”

Following the trip, 360° photographs from the 3D models and a 3D interactive model were produced to show the results to anyone with an interest in the area. At the International Speleological Meeting in Italy in 2019 it could be viewed using virtual reality glasses, and it now lives online.

Explore the 3D model of a contact cave in the Perito Moreno glacier.
Watch some of the highlights from the glacier expedition.

Laser scanning and GNSS surveys were carried out in collaboration with Farouk Kadded from Leica Geosystems France and member of Spélé’Ice association.