The Höllentalklamm - in English “Hell's Gorge” - near Garmisch-Partenkirchen is a unique natural spectacle 1,000m high in the German Alps. It’s part of the hiking route to the Zugspitze peak, a connection only made possible due to a historic bridge across the gorge, built in 1905. Due to its age and deterioration, the bridge and several footbridges had to be replaced in 2020. The local members of the German Alpine Association (DAV) raised money for the 250,000-euro project and found two crucial corporate sponsors – the transport infrastructure specialists ZÜBLIN / STRABAG and Thyssen-Krupp.

A Leica Geosystems partner, STRABAG used a laser scanning solution to capture the new bridge digitally. The survey was a demonstration of the scanners ability to perform even in this ‘hellish’ environment. The digital plans created will be used for future maintenance.

Replacing an historic and much-loved bridge 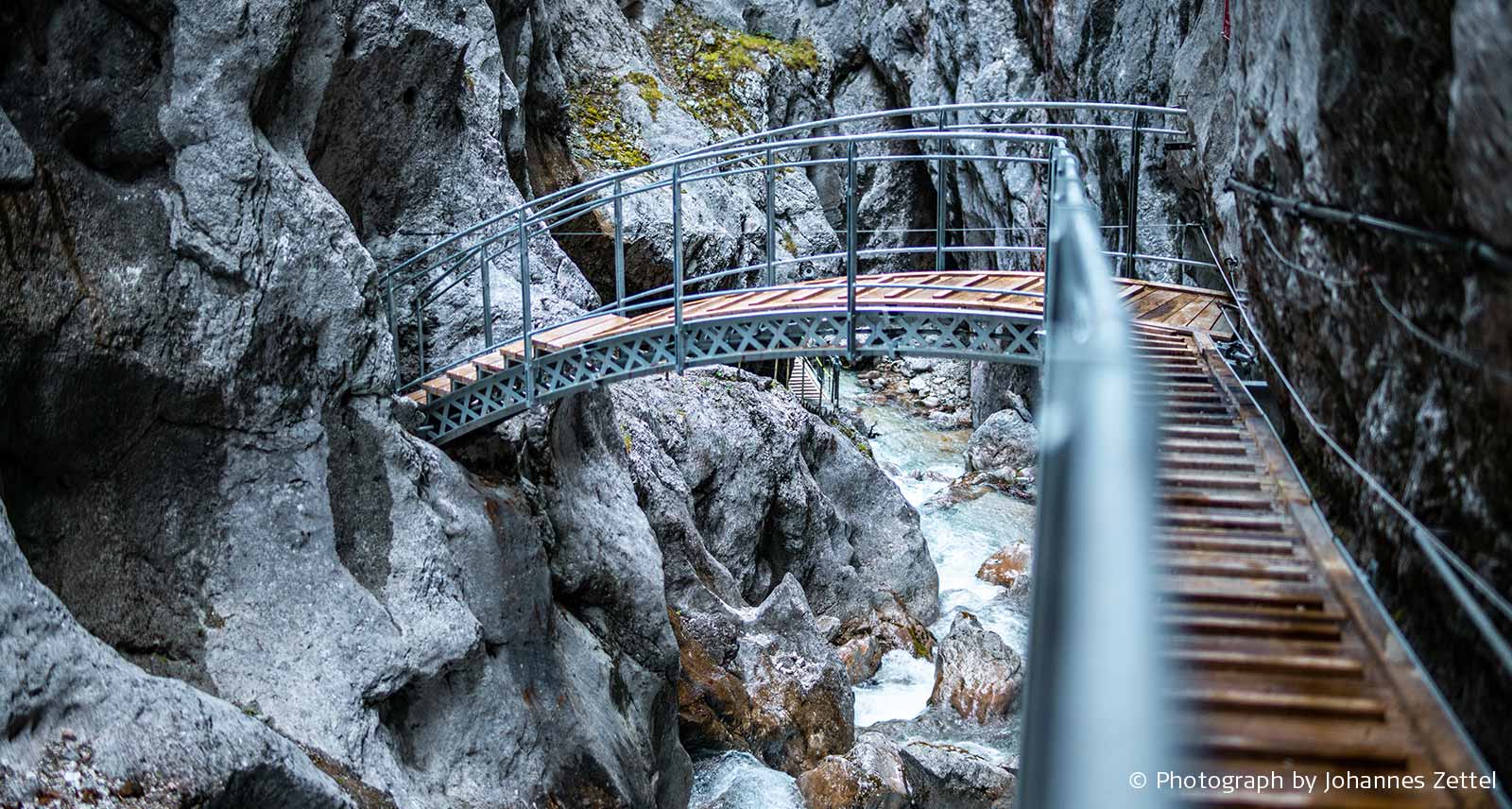 The construction of the first bridge over the gorge took 600 working days to complete, from 1902 to 1905. An impressive feat of engineering, it was completed almost by hand, without electricity or modern machinery. Today, the build materials could be delivered by helicopter at least to the Höllental entrance at 1045m. From there the team, made up of ZÜBLIN / STRABAG engineers, local construction company Florian Dörfler and DAV volunteers, needed to drag the components to the construction site 200m away. To transport the bridge, which weighed over four tonnes, into the narrow gorge, it was divided into some 600 individual parts. The custom bridge and walkway elements were prefabricated by ZÜBLIN’s Structural Steelwork subdivision in Hosena, Brandenburg.

Despite almost perfect preliminary planning, a few obstacles were inevitable. Removing the rock where the bridge supports were anchored proved to be significantly more difficult and time-consuming than expected. Nevertheless, the build took only four weeks. ZÜBLIN site manager Philipp Schön sums up, “The preparations and finally the execution of this sponsorship project against the very special backdrop of the Höllentalklamm was really fantastic. The teams from the various project participants worked wonderfully together, like pieces of a well-oiled machine.” 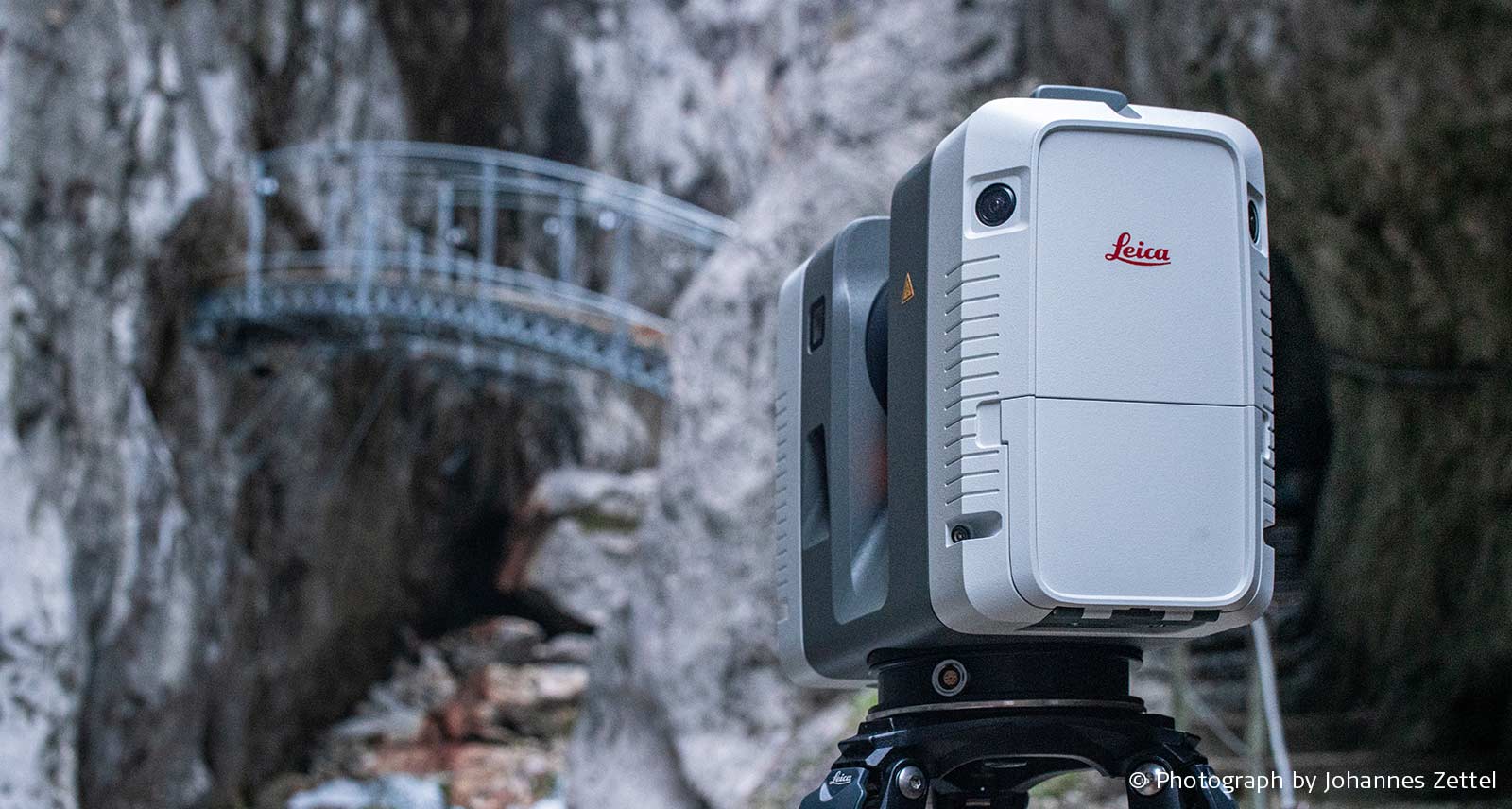 Once the bridge was replaced, Philipp Mielke, Technical Group Manager at STRABAG with Johannes Zettel, Marketing and Thomas Schock from Leica Geosystems used both the Leica RTC360 and BLK2GO to capture a digital twin of the new arch bridge using laser scanning.

The RTC360 provides a clean and highly accurate point cloud while being highly portable. In fact, together with its carbon tripod, it fitted in a backpack and was hiked up to the gorge from the car park. It is also robust - IP54 rated so able to cope with splashes of water - ideal for the wet mountain environment.

The BLK2GO is a handheld imaging laser scanner that recreates spaces in 3D as you move. The operator - Schock - was able to carry it in one hand and scan while walking, making it easy to stay balanced and aware of hazards on the slippery terrain. The software used to process the data was Leica Cyclone REGISTER 360, Leica CloudWorx, Leica TruView Enterprise and Leica Cyclone 3DR.

From bridge capturing to data sharing 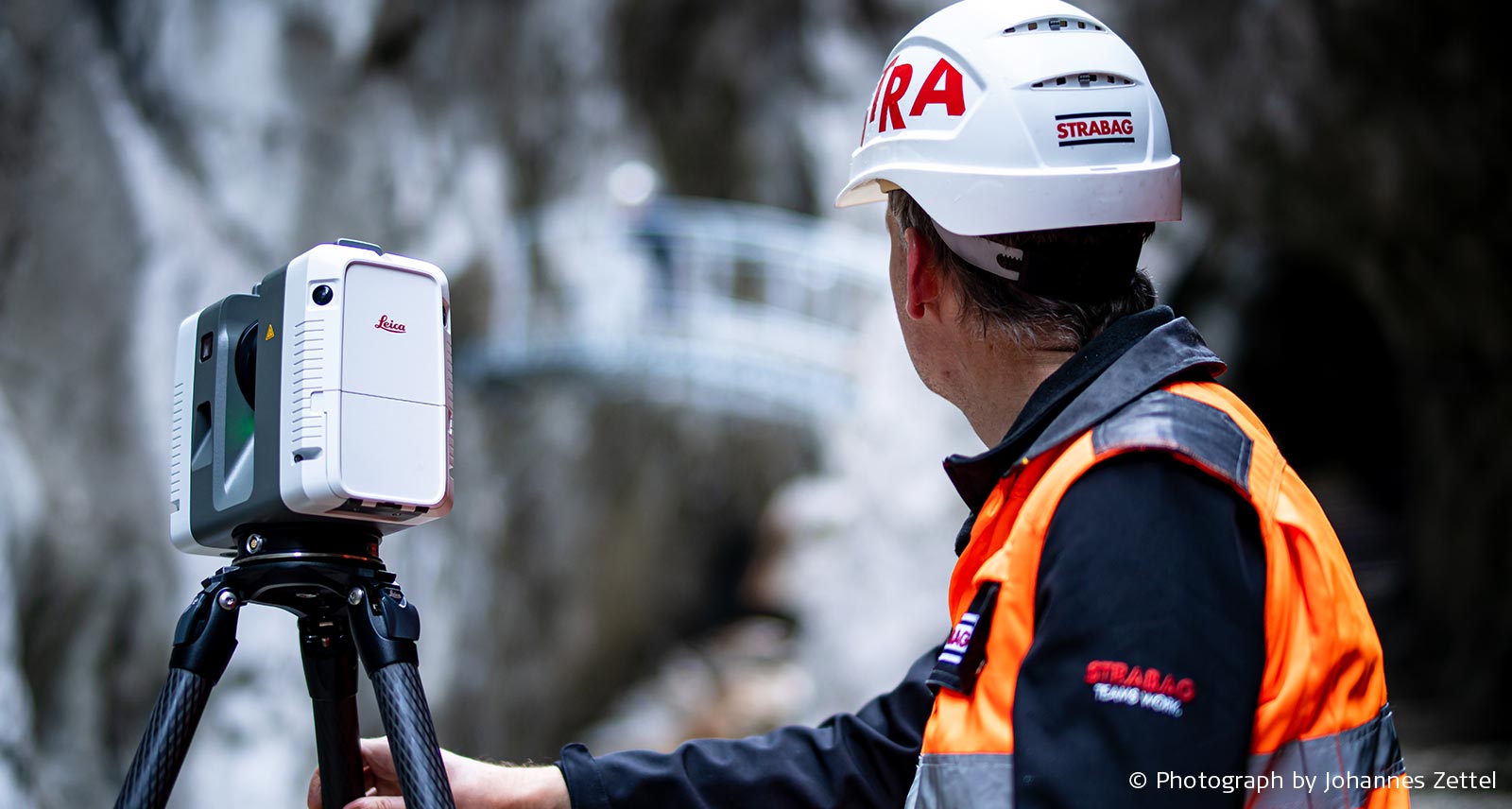 Using the RTC360, Schock carried out scans across five viewpoints: three scans were taken on the bridge, two on either side from 50m away, looking towards it. This created a picture of both the bridge and the rocks of the narrow gorge on all sides. HDR images were taken with the scanner at five exposure stops to allow for an RGB inspection for dark areas (tunnels) and bright areas (those in full high-altitude sunlight). Speaking about the unusual conditions, Schock says, “Surefootedness and a head for heights are required in the Höllentalklamm! But the ascent was quickly mastered with the lightweight RTC360.”

Using the BLK2GO handheld imaging laser scanner, Schock completed several walks taking around 10 minutes, covering 150 - 200m of terrain on each side of the bridge. This was done with enough overlap in the connection areas to allow for the linking of successive trajectories with the Cloud2Cloud algorithm from Cyclone REGISTER 360. 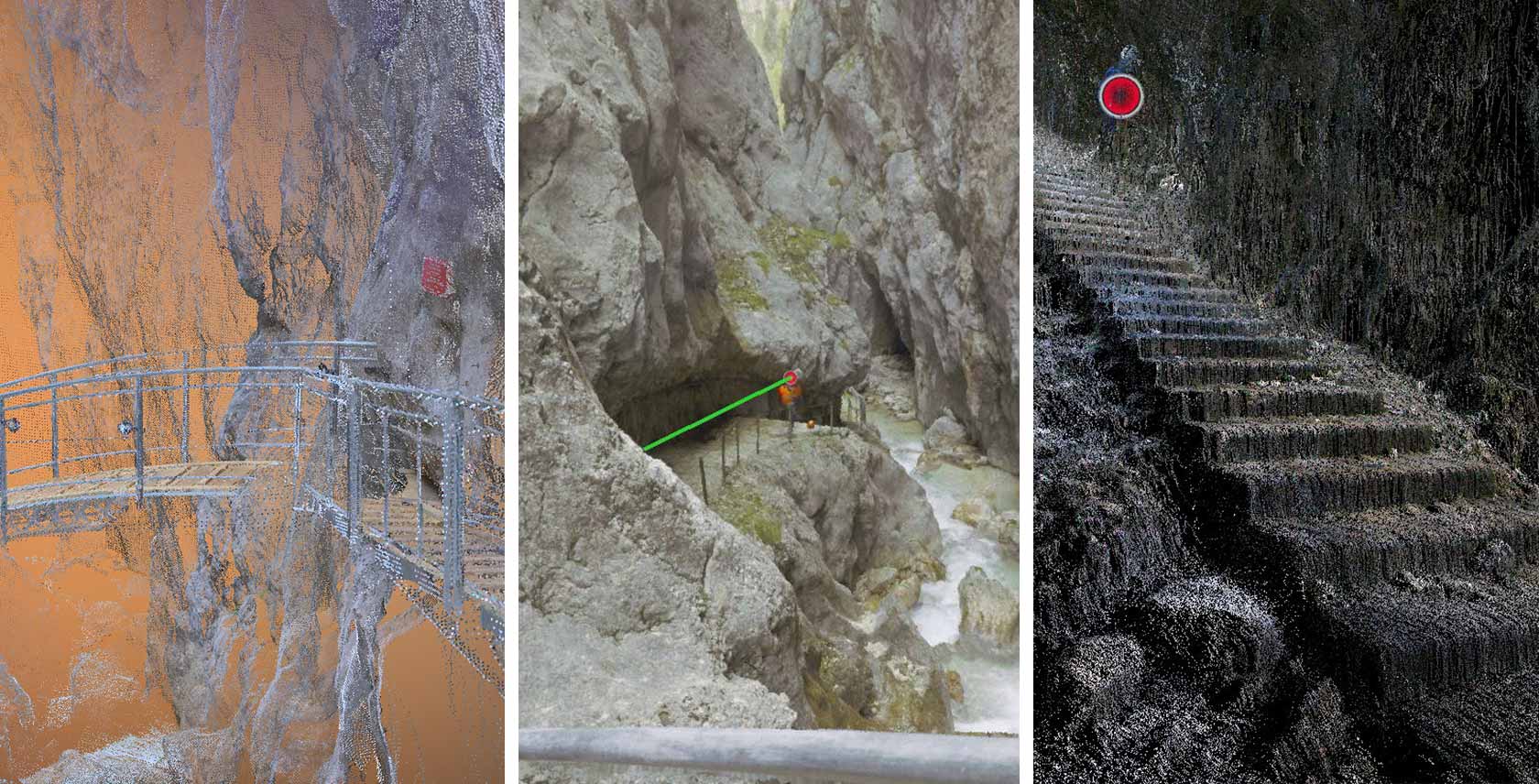 Following scanning, Cyclone REGISTER 360 was used to import, prepare and optimise the data to deliver a LGS data set to use in other Leica Geosystems and third-party applications. TruView Enterprise was used for visualisation, a quick and easy way to share point cloud data with others involved in the project, and Leica Cyclone 3DR will be used to mesh the data for the gorge and tunnels.

Impressive results even in “cramped and constrained conditions” 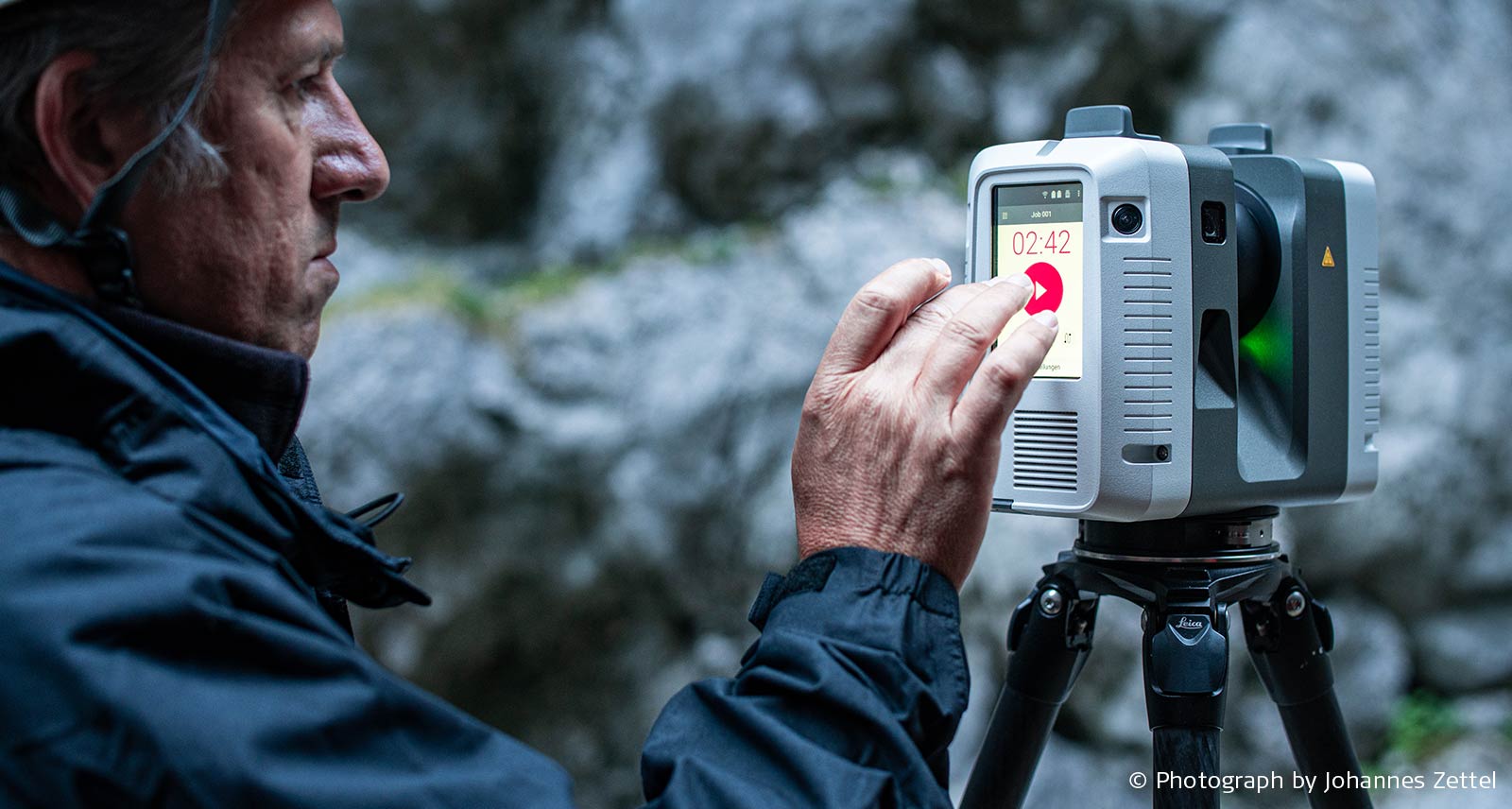 The Höllentalklamm bridge project was an ideal opportunity to put the latest Leica Geosystems 3D laser scanning equipment to the test. Although the location was hard-to-access and the weather conditions were challenging, the laser scanners were as easy-to-use there as they would be at sea level.

Schock says, “Both scanners performed as expected and the results exceeded expectations.” Philipp Mielke from STRABAG agrees, “Results of the bridge scan using the RTC360 were very good. We had no problems in scanning the bridge even in these cramped and constrained conditions.” The company is already using the RTC360 in other tunnel and construction projects and further tests with the BLK2GO are currently in progress or planned.