The ongoing impact of what has now been called the global climate crisis continues to make headlines. This is particularly pertinent when it comes to glaciers across the world retreating at a fast pace. To this end, environmental scientists have been using Leica Geosystems 3D laser scanning technology to better monitor glacier changes in the French Alps.

Geographer and glaciologist Luc Moreau, a member of the Edytem laboratory - a joint research unit of the University of Savoie Mont Blanc CNRS - has monitored this impact for more than 35 years. Moreau's observations have led him to various explorations inside the deep shafts, called Moulins, of ice caps in the Alps and Greenland. His specialisation in glacial hydrology is to better understand the contribution of melting water in the glaciers' movements on bedrock and observe if the ice inside the glacier is melting faster than first thought and the possible environmental impacts.

Since the mid-19th century, the Alps, including the Chamonix Valley, have seen their average temperature increase by two degrees Celsius, and as a result, a third of alpine glaciers have disappeared. In particular, Chamonix Valley's Mer de Glace, the longest (12 km) and largest (30 km²) glacier in France, has receded by 2.7km in 150 years and lost 250 metres thickness in its terminal part.

Here we look at how Moreau’s team of scientists helped to measure the deformation of ice in the Mer de Glace glacier by using handheld and lightweight mobile 3D laser scanning technology, the Leica BLK2GO Handheld Imaging Laser Scanner. 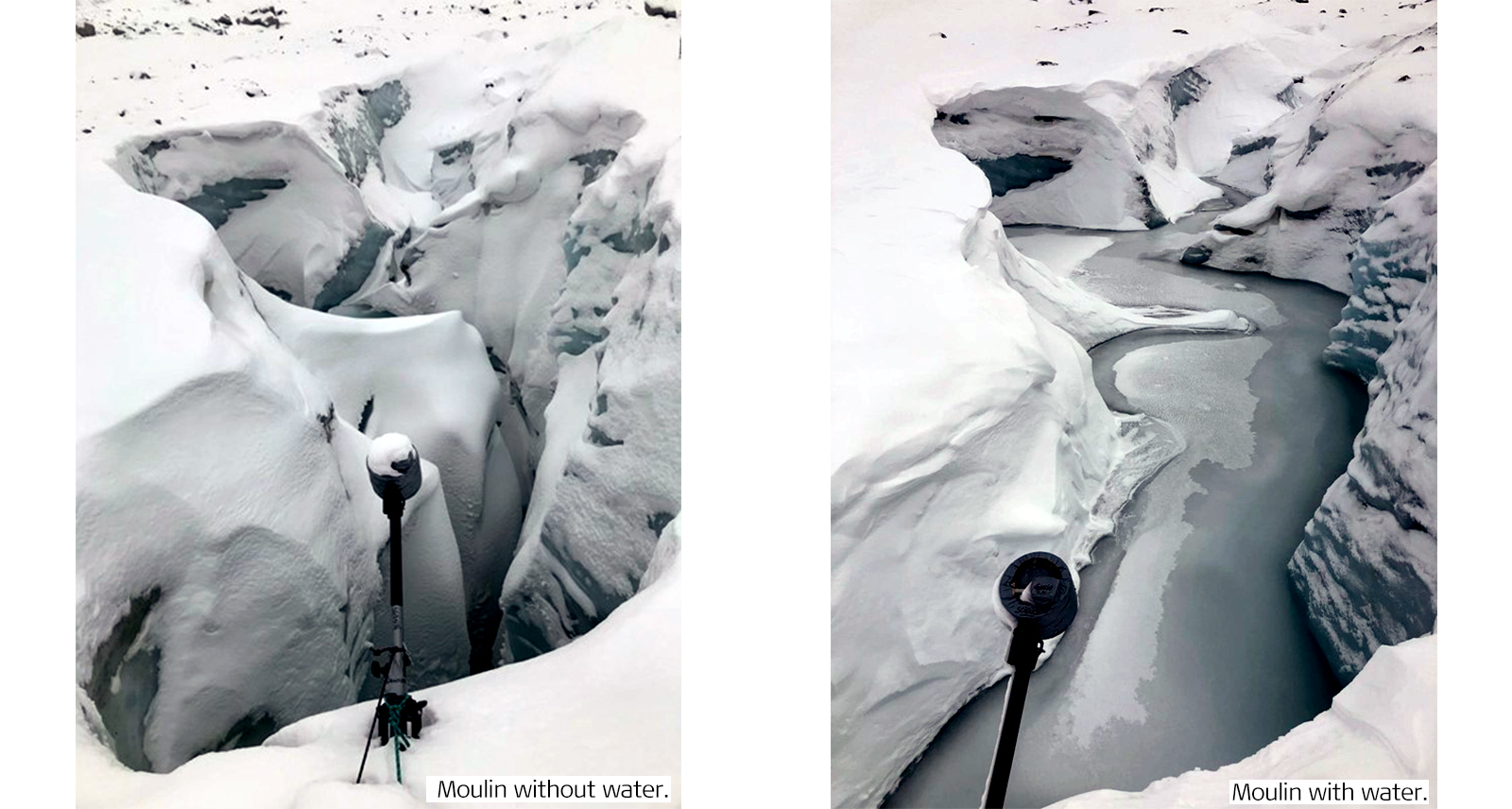 Comparison of the Moulin with and without water. Image Copyright: Luc Moreau

As the ice continues to melt, the crevasses, or the vertical shafts in the glacier, are becoming deeper. At the same time, they have been filling up with melt-water from the surface and then emptying completely. This is a hydraulic phenomenon and a danger of interest to both glaciologists and hydroelectric engineers.

The research team’s scientists chose the “Kira”, the Grand Moulin of the Mer de Glace, which is the deepest crevasse in this glacier, to calculate its volume and potential water storage capabilities and measure the internal deformation of the ice over time.

Descending into the Moulin

To capture a 3D scan of the crevasse, the team installed pressure sensors and lowered the BLK2GO into the empty moulin. The BLK2GO captured and stored the topography of the entire moulin’s geometry. The surface was captured by the Leica GS18 I with images to compute points clouds. The team completed two identical scans a few weeks apart to monitor the deformation of the ice and its movement. Both were successful in taking the measurements and observing the changes within the crevasse shaft. The team recorded that Kira’s volume equated to the same size as an Olympic swimming pool.

The next objective for the research team is to continue using the BLK2GO for ongoing measurements over the next few months. This is so scientists can keep improving their understanding of the ice melt’s hydraulic filling and emptying process and its effect on the glaciers into the future. Learning about the hydraulic properties will also help better understand the flow of the ice masses and their acceleration and deceleration. 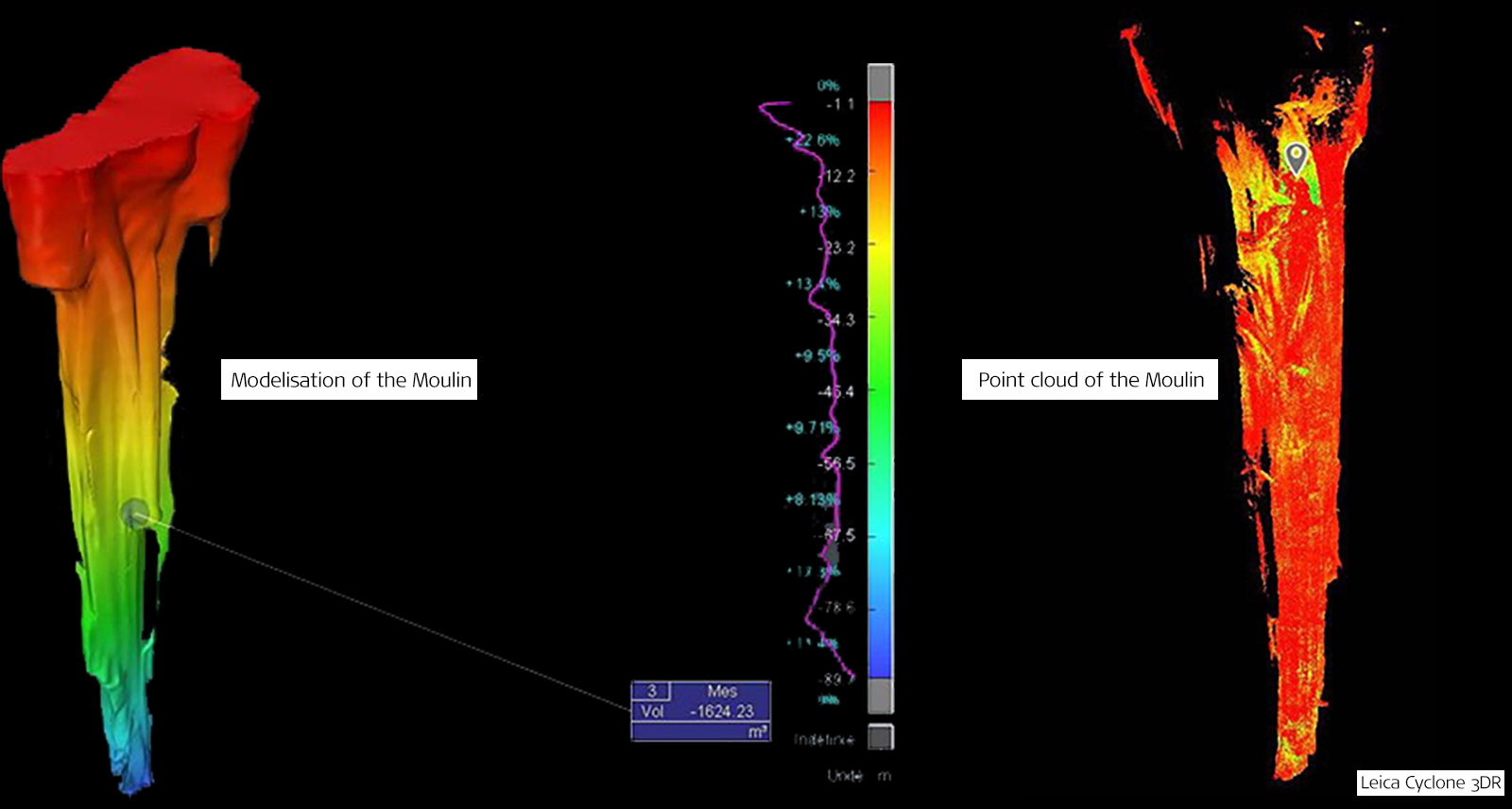 Modelisation of the Moulin with Leica Cyclone 3DR by Farouk Kadded and the Technodigit team.

The research team chose the BLK2GO product because it packs cutting-edge 3D capture technology into a small and lightweight design. With sensor fusion, the BLK2GO employs real-time LiDAR scanning and SLAM tracking in a handheld, mobile device.

The BLK2GO’s agility enables the mapping and 3D capture of large outdoor, complex, underground, and multi-level spaces. It can identify unique geometrics, as is the case for Alpine glaciers, which can then be analysed to calculate the entire scanned area’s 3D position.

Future of the planet aided by new technologies

Mountain glaciers are one of the best indicators of climate variations at all time scales. Tracing ancient and recent fluctuations is essential to better understand the origins of past climate change and quantify those of the future. Glacier movement is difficult to monitor due to rising temperatures which have widened crevasses and increased the amount of bedrock showing through the ice and snow.

Therefore, advancing scanning technologies is becoming essential for these remote environments and rough terrains. Products such as the BLK2GO are becoming an integral part of monitoring climate change's effects.