Coastal surveys are greatly influenced by the quality of the water, which can be degraded by swirling sand, algae, and seaweed. Difficult conditions in the North Sea compound these issues and increase the importance of fast data collection and reliable operations. Finnish company Arctia-Meritaito Ltd. successfully completed an airborne topographic and bathymetric survey on Sylt, a popular German island known for its vacation resorts and 40-kilometre (km)-long sand beach, using a Leica Chiroptera 4X as its surveying instrument.

Sylt Island in northern Germany at the border to Denmark

Threats to the island

The German island of Sylt lies on the outer edge of the Schleswig-Holstein Wadden Sea, between 9–16 km off the mainland. While other islands in the North Sea are surrounded by extensive intertidal sand and mud flats ─ called wadden ─ that protect the coastlines, the west coast of Sylt is completely unprotected and exposed to the forces of the water. Harsh weather conditions such as strong currents from tidal ebb and flow, frequent sea storms, and waves up to 10 metres (m) high continuously reshape the island, despite attempts to reduce erosion along its sandy beaches. Since the 1980’s, preservation efforts have focused on pumping sand back onto the beaches every year, rather than constructing unnatural concrete structures.

The Landesbetrieb für Küstenschutz, Nationalpark und Meeresschutz Schleswig-Holstein (National Office for Coastal Protection, National Park and Marine Protection Schleswig-Holstein) is responsible for drawing up coastal protection plans and implementing appropriate measures. In recent decades, the organization has experimented with different technologies to identify the most effective methods of maintaining the coastlines.

In the past, surveying vessels carried out the bathymetric mapping of the seabed. For profile lines with a total length of approximately 1,100 km, about four weeks was required to allow for the daily varying tide. Mapping was complicated by an underwater reef about 400 – 500 m off Sylt’s west coast, where the depths rise from about -6 m up to 3 m. Outside the reef, the depths in the open North Sea fall again to a depth of about -10 m. This reef has always been an obstacle to measuring the whole area with a vessel due to potential damage to the ship and equipment.

In 2020, Arctia-Meritaito was selected to survey Sylt with a Leica Chiroptera 4X airborne bathymetric scanner. The Chiroptera 4X can typically penetrate down to 25 m and has even reached 30 m depth in ideal conditions. The elliptical scan pattern captures a forward and backward view to provide two data sets of the same point, which reduces noise caused by waves and increases depth penetration. In addition, the oblique view of the laser beam captures data of vertical objects. Despite the turbidity and waves around Sylt, the Chiroptera 4X successfully penetrated 10 m to reach the seabed, meeting all project requirements.

Photo of Sylt, taken from the survey aircraft

“Bathymetric laser surveying from the air is a more suitable method to capture the coastal area of Sylt,” says Lutz Christiansen, head of surveying, topography, morphology at the National Office for Coastal Protection, National Park and Marine Protection Schleswig-Holstein. “By conducting the survey under favorable weather conditions at low tide, Arctia-Meritaito successfully met the required depth and accuracy with an airplane rather than risking running aground with a ship. Based on these results, the measurements will be performed every three years in the future using airborne bathymetry.”

The most notable challenge of collecting airborne bathymetric data is timing. Perfect timing produces a clean data set that is fast to process, while bad timing results in a very noisy data set that does not fulfil the specification, or even no data at all. In the area around Sylt, there are multiple issues. Too much wind makes white water and waves, while algae floating on the surface blocks the laser and fine sand stirred up from the seabed interferes with data collection.

“Being ready at the right time and making the best of the good weather window requires dedication and effort,” explains Mikko Ojala, head of airborne LiDAR bathymetry, Arctia-Meritaito. “The weather and water conditions can change very rapidly. We cannot perform topographic surveys when it is raining, and airborne bathymetric surveys are impacted by inflows of water from the land that increase turbidity. When conditions are finally right, the equipment needs to be functioning and ready to go.”

Spring and autumn, when there is no algae and no ice in the North Sea, typically offer the most favourable conditions. However, seabed material consisting of fine sand is always moving and causing turbidity. As the seabed is frequently changing, overlapping data collected many days apart will not match and will take longer to process. It is crucial to cover the whole project area as quickly as possible to maximize consistency. To capture topographic and bathymetric data of Sylt’s west coast and south and north ends, Arctia-Meritaito targeted June 2020. In two days and a total of five flight hours, the team collected 70 sq km.

“We flew the whole area with only two flights, with one day between, and still the seabed topography had changed between the flights,” says Ojala. “This created a processing challenge because there were two seabeds in some places where the data from the previous flight overlapped.”

In addition to Terrasolid for point cloud processing and the QPS hydrographic software suite, Arctia-Meritaito used Leica LiDAR Survey Studio (LSS) to process all waveform and position data and incorporate four-band camera data from the Chiroptera 4X. Arctia has a LiDAR-specific processing setup based on recommendations from Leica Geosystems.

To ensure high quality results that guide preservation decisions for the future, the surveying contract stipulated that measurements should only be carried out under favourable conditions (easterly winds). Deliverables included point clouds with classifications (1 m and 10 m grid) and orthophotos. The height accuracy had to be better than 20 cm and the positional accuracy better than 50 cm. Processing was completely done by Arctia-Meritaito, with results delivered about eight weeks after data collection.

“We achieved a minimum point density of 5 points per square metre (p/sq m) in the water, thus demonstrating the Chiroptera 4X fulfils general industry requirements in shallow water,” says Ojala. “In addition, simultaneous collection of the bathymetric and topographic point cloud along with aerial imagery is highly efficient and produces a seamless data set from the land to sea bottom.”

The data set confirms the status of the coastline and allows for further analysis. When compared with previous measurements, the 2020 survey indicates that the sand deposits added to the beach have contributed to the protection of the coast since the 1980s. Lutz Christiansen intends to continue monitoring of Sylt with periodic bathymetry measurements.

“I am very satisfied with the results. The Chiroptera 4X reached the necessary depth,” says Christiansen. “The data density, accuracy and type of processing met all of our requirements. It was an excellent project that provides an up-to-date status of the west coast and shore area. Now we have a digital terrain model (DTM) from the steep coast of +20 m down to -10 m water depth.”

Results of the airborne bathymetric survey with the Leica Chiroptera 4X

Arctia-Meritaito specializes in hydrographic mapping, fairway maintenance and maritime navigation, carried out with a fleet of ice-breaking ships and surveying vessels. With its roots reaching back to the Finnish Maritime Administration and its predecessors, the company has highly skilled professionals familiar with the unpredictable waters of the Finnish archipelago and surrounding region.

Traditionally, Arctia-Meritaito surveyed shallower depths with vessels equipped with a single beam echosounder that resulted in depth profiles at defined interval distances rather than complete coverage. This approach left significant data gaps between the survey lines in a single beam dataset.

In 2015, a pilot project was conducted by the Finnish Hydrographic Office that compared the performance of several airborne bathymetric sensors. This project proved that airborne LiDAR surveys could meet required mapping standards in shallow water. A subsequent project in 2016 favourably compared airborne LiDAR results to single beam and multibeam echosounders. To adapt to changing industry demand and remain technologically up to date, Arctia-Meritaito replaced its single beam echosounder service with airborne bathymetric LiDAR.

“There were other sensors in the 2015 pilot project, but we saw that the Leica Chiroptera 4X provided the most promising results,” says Ojala. “By replacing single beam vessels with airborne LiDAR, we get full coverage in shallow waters with depth penetration down to 25 m depending on the conditions, while minimizing the risk of losing sensors. Now we collect land and water in one effort, instead of executing a separate survey for the land portion.”

The Schleswig-Holstein national agency for coastal protection has been evaluating airborne bathymetric technology since 1992. By 2015, results from deep-sea airborne LiDAR sensors compared to other types of sea measurements showed that airborne LiDAR was suitable and able to penetrate the water up to 3x Secci depth. Secci depth refers to a measurement of the turbidity of water, i.e., the depth at which light can no longer penetrate the water.

Thanks to improvements in laser technology and more sophisticated algorithms, today it is possible to reach depths of -25 m or more with a shallow-water sensor, such as the Chiroptera 4X, previously attainable only with a deep-sea sensor or echosounder. 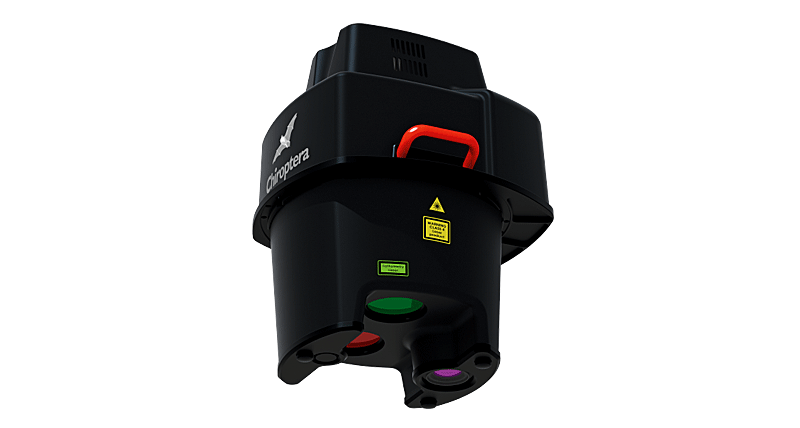