The Road Less Travelled: Innovative Digitisation of a Mountain Road with the Leica Pegasus:Two Ultimate

The alpine roads in Berchtesgadener Land, Germany, offer some of the most breathtaking views in the world. As the gateway to tourist areas in the southeastern tip of Bavaria, it’s vital to the local economy that the roads are kept in a good condition. The responsibility for that falls to The Traunstein State Building Authority (TSBA). TSBA manages the alpine roads in addition to a network that includes hundreds of kilometres of federal and state roads, walking and cycling paths, bridges, support structures and tunnels. A pioneer in using digital methods, TSBA wanted to create a digital record of the area as a basis for planned construction work. The Authority asked Ing Geovision, surveying and geospatial data management experts, to survey a 3.2 km stretch. After exploring options, Ing Geovision used a Leica Geosystems mobile mapping solution to digitally capture the road and its retaining walls. The project was the first time that mobile mapping had been applied to this type of challenge. 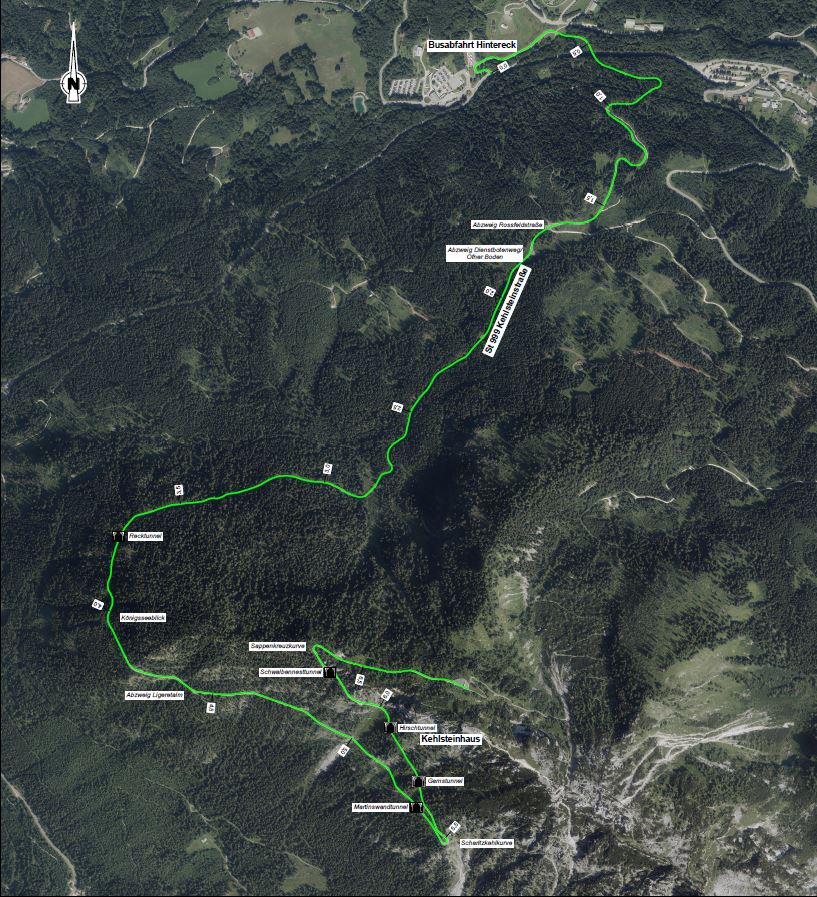 With a 23% slope in some places and huge drops into the valley below, the roads in Berchtesgadener Land are not easy to survey. It’s particularly difficult to access both sides of the retaining walls, as they are built on steep, heavily overgrown terrain. Due to the altitude and remoteness there was a weak GNSS signal over almost the entire distance, especially in the five tunnels included in the survey area. On top of the physical constraints, the survey also needed to be carried out quickly. The road could not be closed or blocked for long, to keep the route free for tourist buses. Nevertheless, because the data obtained from the survey was to be used as the basis for planned construction work, the road and walls needed to be recorded with the greatest possible accuracy.

The Ing Geovision team are highly experienced in holistic surveying. They have been the digitisation partner for buildings, plants and other infrastructure in more than 1,000 successful laser scanning projects. For the Berchtesgadener Land project, they considered various methods: laser scanning via a drone, tachymeter measurement, a static scan and mobile mapping. The evaluation criteria included time spent on site, accuracy of the data, ability to detect the retaining walls and the road condition in high resolution. Finally, whether the method could be used to gather photo documentation and point cloud data in one operation.

A drone was ruled out because it could only deliver photos, tachymeter surveying because it couldn’t deliver photos or point cloud data. A static scan would take too long and couldn’t be positioned on the outside of the walls in many places. Although untested in this scenario, mobile mapping was able to deliver on every criteria. Mobile mapping systems combine sophisticated hardware sensors and software technologies to take laser scanning off the static tripod, letting the team capture accurate 3D data by car.

Unconventional attachment of the scanner solved the site access problem

Ing Geovision put together a scanning solution using the Leica Pegasus Ultimate II mobile mapping platform. Ingeniously, in order to capture both sides of the retaining walls the Leica Pegasus Ultimate II was not only mounted to the roof of a car, but also to the bucket of an excavator. This allowed the scanner to hang over the edge of the wall and capture the exterior, with no risk to human safety. Measurement of control points was done by a tachymeter TS16 and the tunnels were additionally scanned using a static RTC 360, in order to look for a historical drainage system. The data was evaluated using Leica Pegasus Manager, Leica Cyclone and Leica Cyclone 3DR. 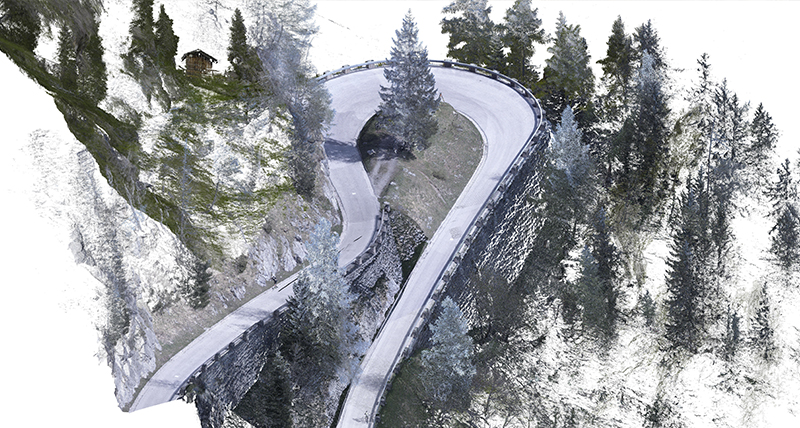 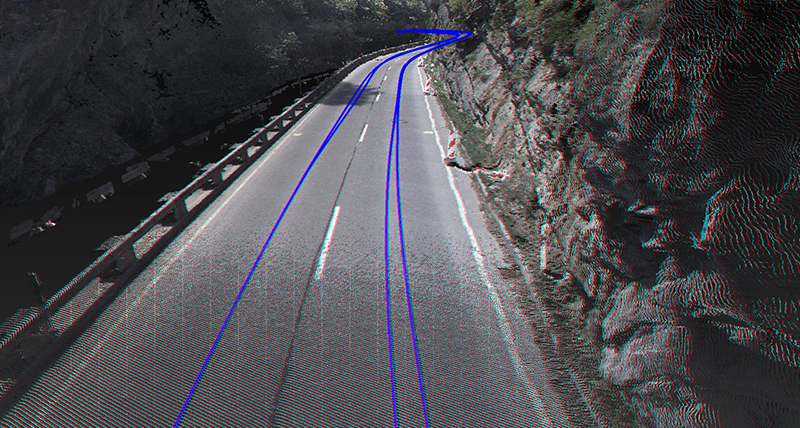 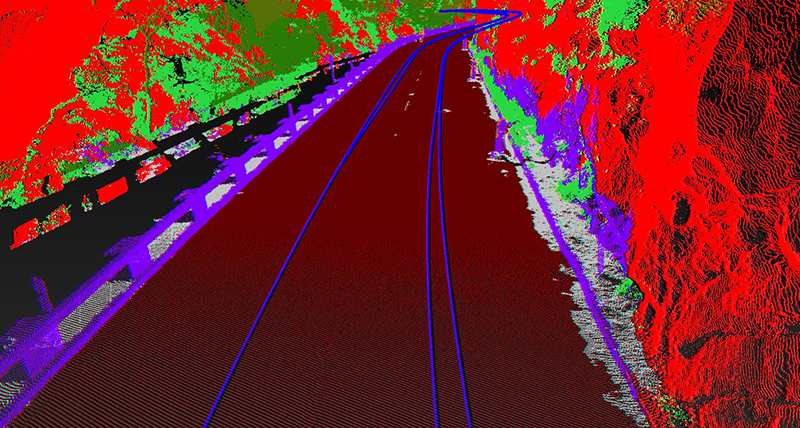 A major benefit of using the mobile mapping solution was the short amount of time on site. It took only half a day for the Leica Pegasus Ultimate II to record the 3.2km of road by car and a further half day to record the difficult sections of retaining wall, when mounted to an excavator. Even during this time, tourist vehicles were still able to use the road, meaning that the inspection had minimum impact on the local economy. Approximately 162 GB of raw data was collected, which resulted in 600 GB of processed data - ultimately delivering the digital terrain model and inventory plans necessary to inform future building work. Meeting TSBA’s requirement for accuracy, the data had an absolute accuracy to within 2 - 3cm.

TSBA has been a pilot Building Office for BIM since 2019. The Authority has managed to bring in a high degree of digitization to the assets under its management, making planning, construction and maintenance more efficient. With this project, complete digitisation of an alpine road was achieved for the first time during a regular build inspection. The willingness of Ing Geovision and TSBA to innovate with mobile mapping for this purpose has created a new proven method of reality capture for difficult and high altitude terrain. It’s certain to be used again.

"Mobile Mapping is so advanced nowadays, it can be used also for Monitoring purpose. Within the evaluation of possible data capture solutions the Leica Pegasus:Two Ultimate was the fastest and most accurate solution for the detection of the area.” Sven Gollub, Project Manager at ing Geovision. 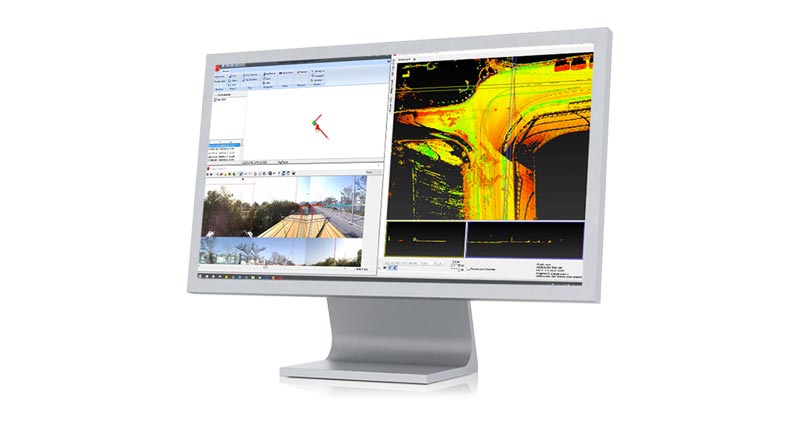