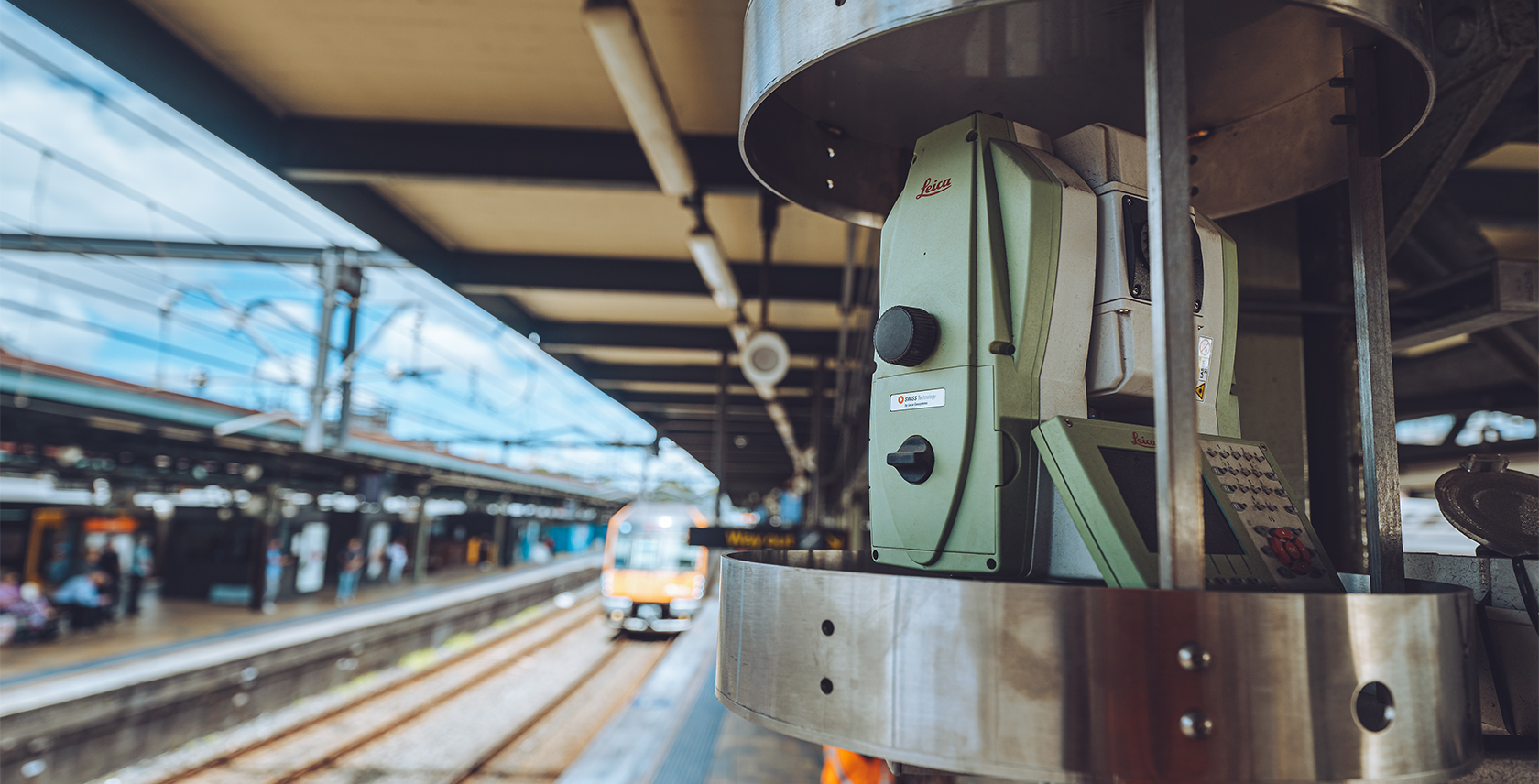 As excavation and construction barrel ahead on the Sydney Metro, Australia’s biggest ever transport project, a small and vital team of engineers have been quietly navigating the crowds and rumbling trains that define Sydney’s Central Station.

They are using state of the art equipment to monitor the tracks and existing infrastructure to make sure the massive works necessary to bring new Metro trains to the 120-year-old Sydney landmark, aren’t endangering the more than 100,000 daily riders that already shuffle through.

That important job was awarded to the team at GLS Monitoring, a joint venture between Land Surveys and Geomotion Australia. With an iconic building and the safety of so many riders on the line, the team knew the equipment had to be precise and sturdy enough to withstand the challenges of the busy station.

“Thankfully, I’m really satisfied with the Leica instruments we have,” says Szabolcs Fajcsi, Instrumentation and Monitoring Manager with GLS Monitoring.

“We don’t get the call often, but for example the contractor might ring up on a Sunday night saying, ‘OK, can you just please check the south end of track 16 to see if there are any movements on the track that will cause us to stop the trains?’”

“You have to be really, really quick, and ready to make a call before something bad happens,” he says. “But the instruments we use make it really easy to give a reliable answer so that when the client needs you to make the call – you can make the call.”

Those quick calls are made possible by a robust and complex monitoring system the GLS Monitoring team developed with the help of their partners at distributor CR Kennedy.

Fig 2. The team installed more than 4,500 prism reflectors across the tracks and station platforms.

They built a massive network that includes 28 Leica Nova TM50 monitoring stations pointed at more than 4,500 prism reflectors installed across the tracks and station platforms, along with an assortment of other geotechnical sensors.

The team have employed Leica’s GeoMoS Monitoring Software to keep a watchful eye on the trove of data coming in round-the-clock and provide alerts in case it detects any movement outside acceptable limits.

“GeoMoS is one of the more widely used pieces of software across the world, and we are familiar with its data structure and how to extract the information we need,” says Drew Coulthard, National Monitoring Manager with Land Surveys. “When it comes down to it, GeoMoS is tested, tried and proven.”

Fig 3. GeoMoS Monitoring Software keeps a watchful eye around the clock and alerts in case movement is detected.

Coulthard says the team needed proven precision from each instrument they chose for the project.

“One of the key factors with the Leica Nova TM50s is their ATR (automated target recognition) ability, especially considering all the densely located prisms required for this job,” he says.

“So, for example, on the track you might have prisms three metres apart, but from the instrument’s field of view they look very close – the Leica TM50 is pretty superior when it comes to being able to recognise each prism,” he says.

“And another major factor with the TM50s is that we know that they are really good hard-wearing instruments that perform well in a pretty tough environment.

”GLS Monitoring’s Szabolcs Fajcsi knows all too well how demanding Central Station can be on both the equipment and the team.

“Well, we have constant maintenance, mainly because with all these prisms on the tracks and the dust at the station, the prisms get dirty every two weeks or so,” Fajcsi says. “So, it’s especially challenging sometimes to find a timeframe where you can jump on the tracks and clean and reinstate those targets with how busy the station can be,” he says.

Fajcsi says the GLS Monitoring team have had very few issues with the Leica TM50 monitoring stations even with the adverse conditions. But, in the very few instances where they units have needed some attention it was a real plus having the CR Kennedy support available at short notice.

“It’s usually pretty easy and quick to just take the unit to CR Kennedy where they are able to give us a quick calibration or solution for the problem, usually with just a couple days turnaround,” he says.

Drew Coulthard with Land Surveys says the age and complexity of Central Station make it an especially exciting, but complicated, site to build at and to monitor. In other words, there is a lot of existing, vital, infrastructure and just about everything has moved over the years – even the tracks.

That is why the team had CR Kennedy supply them with an Amberg GRP 1000 Rail Trolley, which they used to conduct a base survey of the real track conditions and geometry at the start of the project.

Because of the dynamic nature of Central Station, Instrumentation and Monitoring manager Szabolcs Fajcsi says the trolley still tends to get used a few times a month, more than a year into the project.

“We have the monitoring from track eight all the way to track 23 – that is pretty much four kilometres of track in total,” Fajcsi says. “If there is some sort of maintenance on the tracks then we need to do a trolley survey to be able to provide automated track geometry monitoring.”

Land Surveys have purchased at least two more of the trolleys, seeing the value they can bring in projects across Australia including a major rail project for mining giant BHP in the Pilbara and a commuter rail job in Perth.

But Fajcsi is satisfied keeping his focus trained on the massive construction project underway at Central Station and his role in making sure it goes smoothly.

“This is pretty amazing,” he says. “The amount of excavation that they are doing right under the live tracks without any interruption on the traffic really is just amazing.”

“This is a really challenging environment to do monitoring in, and that just keeps us going.”